The curfew provides cover for security forces to clear the square but demonstrators say they intended on going nowhere.

Iraq declared a curfew in Baghdad on Monday as anti-government protests in which over 200 people have been killed entered a fourth day and the coalition government's most powerful erstwhile supporter called for early elections.

The curfew provides cover for security forces to clear the square, demonstrators said, but they intended on going nowhere.

"No, we will stay. They have now declared a curfew and severe punishments for anyone not going to work, this is how they fight us. We will stay here until the last day, even if there are a thousand martyrs," one protester said.

The unrest, driven by discontent over economic hardship and deep-seated corruption, has broken nearly two years of relative stability in Iraq, which from 2003 to 2017 endured a foreign occupation, civil war and a Daesh insurgency.

Security forces on Monday fired tear gas at school and university students who defied a warning from Prime Minister Adel Abdul Mahdi and joined thousands in Baghdad protesting against his government.

A spokesman for the premier, whose position is increasingly precarious in the face of the stiffest challenge since he took office a year ago, said on Sunday that anyone disrupting work or school days would be severely punished.

"Abdul Mahdi must go to parliament and announce early elections to be overseen by the United Nations," Sadr said in a statement. He called on existing political parties not to run.

Mass street protests in Baghdad and other cities in the south flared at the start of the month and resumed on Friday after a pause of about two weeks.

Thousands of protesters gathered in Tahrir Square on Sunday, defying a bloody crackdown that had killed scores over the previous two days, and an overnight raid by security forces seeking to disperse them.

'We have come out today to demand our rights'

Protesters feared a repeat on Sunday night but no raid transpired, rather only the occasional burst of tear gas. Demonstrators turned up in large numbers again on Monday.

After a weekend in which at least 74 people were killed, a reprieve from violence came when no deaths were recorded in Baghdad or elsewhere overnight. About 231 people have been killed overall in October.

Videos on social media showed security forces on Monday firing tear gas at students in one Baghdad district as the protests spread to other pockets of the capital. One video showed a group of schoolgirls running and screaming. Students in five other provinces, mostly in the south, also joined protests.

"We have come out today to demand our rights, which have been taken away since 2003 when the American government handed us over to a bunch of thieves," said Abbas al Hamzawi, an archaeology student in the southern city of Diwaniya, referring to the US-led invasion that year that ousted Saddam Hussein.

"We are here today for freedom, dignity, and a good life. We demand the fall of the regime, the suspension of the constitution, and an emergency government," he said.

The OPEC member country boasts vast oil wealth, but many Iraqis live in poverty or have limited access to clean water, electricity, basic health care and education. The country is still struggling to recover from years of conflict since 2003.

Iraqis blame a political elite they say is subservient to one or another of Baghdad's two main allies, the United States and Iran. Many suspect these powers use Iraq as a proxy to pursue their struggle for regional influence, without concern for the needs of ordinary people.

Parliament passed measures on Monday aimed at placating the protesters but many said this was too little too late.

They included reduced salaries for officials, the formation of a committee tasked with drafting constitutional amendments within four months, and the dissolution of all provincial and local councils outside the semi-autonomous Kurdish Regional Government.

"Oh revolutionaries, do not be fooled by parliament's vote, it's all a sham until there are strict legal measures. Their session did not hold the corrupt accountable," said Sadr.

Despite promising reforms and ordering a broad reshuffle of the cabinet, Abdul Mahdi has so far struggled to address the demonstrators' complaints.

Political alliances backing his ruling coalition have begun to fracture, with Sadr's bloc saying on Saturday it would go into opposition until protest demands were met.

The Saeroon bloc — an alliance of Sadr's followers, communists, and other parties — is the largest in Iraq's fragmented parliament with 54 seats out of 329.

Abdul Mahdi warned on Thursday that any collapse of the government would drag Iraq into deeper turmoil. 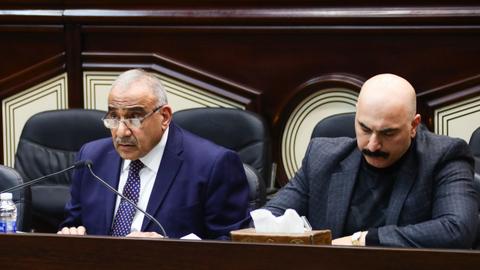 Why Iraqis differ on expelling US forces