This year’s elections are being held under a new electoral law that divides Iraq into 83 constituencies instead of 18, which, in theory, allows more independent candidates to participate.

Iraqis are going to the polls for early parliamentary elections two years after a wave of anti-government protests swept the war-scarred country but analysts say the vote is unlikely to deliver major change.

Prime Minister Mustafa al Kadhimi's political future hangs in the balance, with few observers willing to predict who will come out on top after the lengthy backroom haggling that usually follows Iraqi elections.

A new single-member constituency system for electing Iraq's 329 lawmakers is supposed to boost independents versus the traditional political blocs that are largely centred on religious, ethnic and clan affiliations.

The election is being held a year early in a rare concession to the youth-led protest movement that broke out in 2019 against a political class widely blamed for graft, unemployment and crumbling public services.

Hundreds died during the protests, and dozens more anti-government activists have been killed, kidnapped or intimidated in recent months, with accusations pro-Iran armed groups have been behind the violence.

Many activists have urged a boycott of the polls and record abstention rates are predicted among Iraq's 25 million eligible voters, while experts predict the main parties are likely to maintain their grip on power.

The early vote is "unlikely to serve as an agent of change", said Ramzy Mardini of the University of Chicago's Pearson Institute.

"The election is meant to be a signal of reform, but ironically those advocating for reform are choosing to not participate... as a protest against the status quo."

READ MORE: Can elections change anything in war-torn Iraq?

Iraq is mired in corruption and an economic crisis, with nearly a third of its people live in poverty despite the country's oil wealth.

The risk of violence is rising amid a proliferation of armed factions and an extremist resurgence, even as the country tries to emerge from almost two decades of conflict.

With the main political blocs linked to armed groups, many Iraqis are worried about security in the wake of the result.

A dozen Western governments including the US and the UK on Wednesday called on "all parties to respect the rule of law and the integrity of the electoral process".

The United Nations and the European Union have deployed vote monitors and observers.

Iraq's political scene remains deeply polarised over sensitive issues including the presence of US troops and the influence of neighbouring Iran.

But even in the fragmented Parliament, where alliances are stitched up and then undone, political blocs will have to overcome their differences when it's time to name a prime minister – a position usually reserved for a Shia Muslim.

Shias account for around 60 percent of Iraq's 40 million people, while Sunnis make up 32-37 percent.

The pick for PM will "depend on the level of representation of the different blocs, particularly in the Shia camp," said Iraqi political scientist Ali al Baidar.

He noted the ambitions of the Sadrist bloc, headed by firebrand Shia populist cleric Moqtada Sadr, the former leader of an anti-US militia.

Also known for his anti-Iran rhetoric, Sadr is considered a favourite in the polls and would like a free hand to name the prime minister.

But the Hashd al Shaabi, or Popular Mobilisation Forces, also wants to hold onto its gains. The powerful network of mainly Iran-dominated former paramilitary groups helped defeat the Daesh terror group in 2017.

Meanwhile, in the Sunni camp, the young and influential speaker of parliament, Mohammed al Halbussi, will be looking to consolidate his popular base after his rapid rise as a political key player.

Any compromise candidate for prime minister will have to have the tacit blessing of Tehran and Washington, arch-foes that are both Baghdad allies.

When it comes to forming a government, Shia parties will likely face initial internal disagreement, according to Mardini, "but that's a bargaining tactic".

"The core of government formation will remain the established political parties and bosses. Independents can only be a superficial accessory to it."

Baidar left open the possibility that incumbent Kadhimi would hang onto his position.

"He's not the preferred pick of the pro-Iran factions, but they will accept him if the alternative is a candidate that takes a harder line towards Tehran," Baidar said.

Far from the political horse-trading, many Iraqis feel deeply disillusioned by a political establishment that they blame for the country's ills.

Jawad, an elderly man who declined to provide his surname, lost his son two years ago when authorities used force to put down the anti-government protests.

He said he was still waiting for justice and wouldn't vote on Sunday, charging that "my son was killed by the same militias that make up the corrupt government". 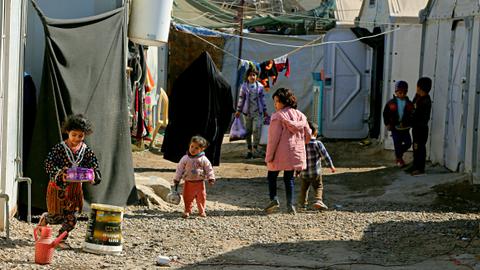 Will US sanctions on Iran really end up hurting Iraq's economy?