The outbreak of violence came as tens of thousands of worshippers flocked to Jerusalem's Al Aqsa Mosque for noon prayers on the last Friday in the holy fasting month of Ramadan.

Israeli police shot and killed a 16-year-old Palestinian near the occupied West Bank separation barrier on Friday, Palestinian health officials said, while another Palestinian was killed by Israeli forces in Jerusalem, according to Israeli police.

Israeli police shot and killed 16-year-old Abdullah Ghaith near the West Bank city of Bethlehem, the Palestinian Health Ministry said, adding that another 21-year-old Palestinian was wounded by a live bullet to the stomach.

Israeli police and witnesses said the two Palestinian youth were shot while attempting to climb over the heavily guarded separation barrier from Bethlehem into Jerusalem to perform Friday prayers at the Al Aqsa Mosque. The police added that they were launching a probe into the incident.

Israeli authorities have banned Palestinian men under 40 from entering Jerusalem on Fridays during Ramadan unless they have special permits.

The boy's father, Louai Ghaith, said his son had been trying to enter Jerusalem to pray at Al Aqsa Mosque for the holy day.

Ghaith's body was brought to a Bethlehem hospital, where his distraught family identified him.

Separately, Israeli police shot dead a 19-year-old Palestinian who they said was suspected of carrying out two stabbings near Damascus Gate.

The Palestinian Health Ministry identified the teen as Yousef Wajih, from a village near the West Bank city of Ramallah.

Police said one Israeli was in critical condition, while the second was in moderate condition.

The two Palestinians lost their lives as tens of thousands of Palestinian Muslims converged on Jerusalem’s Al Aqsa Mosque to mark the fourth and last Friday of the Ramadan fasting month.

Men over 40, children under 12, and women of all ages were allowed by the Israeli authorities to enter occupied East Jerusalem without permits.

Israeli police, meanwhile, stepped up security at the Al Aqsa Mosque complex, deploying hundreds of troops in and around Jerusalem's Old City.

Israel has illegally occupied East Jerusalem, in which the Al Aqsa is located, since the 1967 Arab-Israeli War.

In a move never recognised by the international community, Israel annexed the entire city in 1980, claiming it as the self-proclaimed Jewish state’s “eternal and undivided” capital.

For Muslims, Al Aqsa represents the world's third holiest site after Mecca and Medina. Jews, for their part, refer to the area as the “Temple Mount”, claiming it was the site of two Jewish temples in ancient times.

International law continues to view both the West Bank and East Jerusalem as “occupied territory”.

Protesters in Gaza demand the right of Palestinian refugees to return to their homes in historical Palestine, from which they were driven in 1948 to make way for the new state of Israel.

They also demand an end to Israel's 12-year blockade of the Gaza Strip, which has destroyed the coastal enclave's economy and deprived its roughly two million inhabitants of many basic commodities.

Palestinians have been protesting against Israel since March 2018 as part of the "Great March of Return", during which Israeli troops have targeted civilians with live bullets.

Over 200 Palestinians have been killed by Israeli troops since the beginning of the demonstrations. 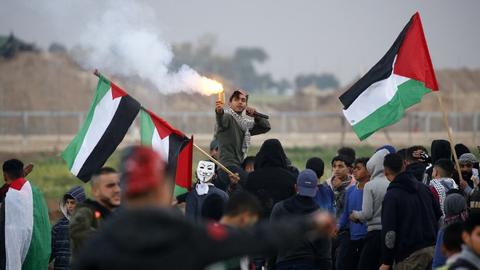