The accident occurred at a major shrine where Shia pilgrims were marking the holy day of Ashura. Officials say another 100 people are injured.

At least 31 people died and another 100 were wounded on Tuesday at a major shrine in Iraq's Karbala city after a reported walkway collapse triggered a stampede.

Thousands of Shia Muslims were marking the mourning rituals of Ashura at the Iman Hussein shrine when the accident took place, a Health Ministry spokesman said.

Ministry spokesman Saif al Badr said the death toll could rise further, as some of the wounded were in critical condition.

The Associated Press reported part of a walkway collapsed during Ashura observations, prompting people to run to safety.

Tens of thousands of people converge on the holy city at the start of Muharram — a holy month for all Muslims — to mark one of the most sacred religious holy days for the Shia sect.

The day of Ashura, which falls on the 10th of Muharram, commemorates the killing of the Prophet Muhammad's grandson Imam Hussain by a rival Muslim faction in Karbala, in present-day Iraq, in 680 AD.

Streets across the country were shuttered on Tuesday to allow for funeral-style processions and elaborate re-enactments of the Battle of Karbala.

Some whipped their backs and chests to demonstrate their sorrow.

Others –– even young boys –– cut incisions into their foreheads with scalpels or large sabres, leaving streams of blood cascading down their faces.

After Saddam's ouster in 2003 by the US-led invasion, Iraq was rocked by years of intra-communal fighting.

The spectre of sectarian violence made such processions deadly for years to come.

In 2005, at least 965 pilgrims heading to the Imam Kadhim shrine in Baghdad during a different holiday died after rumours of a suicide bomber in the crowd sparked a mass stampede.

And in 2013, nearly 40 Shia pilgrims were killed across various Iraq cities in a series of attacks on Ashura.

The following year, Daesh swept across a third of Iraq and carried out mass attacks against civilian populations, including Shias.

Iraq declared victory against Daesh nearly two years ago, but the group continues to wage hit-and-run attacks in remote parts of the country. 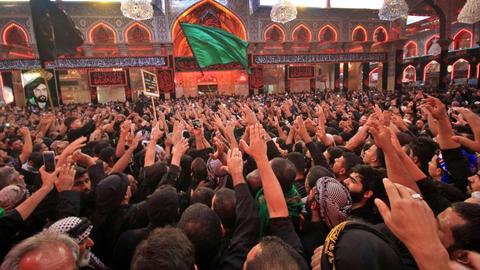 Millions of Shias gather in Karbala for Arbaeen