Sheikh Sabah al Ahmad al Jaber al Sabah was flown to the US on July 23 to complete treatment after undergoing a "successful surgery" at a hospital in Kuwait City.

"With great sadness and sorrow, the Kuwaiti people, the Arab and Islamic nations, and the friendly peoples of the world mourn the death of the late His Highness Sheikh Sabah Al Ahmad Al Jaber Al Sabah, Emir of the State of Kuwait who moved to the realm of the Lord," the sheikh said, without offering a cause of death.

The ailing emir was flown to the US on July 23 to complete treatment after undergoing a "successful surgery" at a hospital in Kuwait City.

In September 2019, the emir underwent medical tests shortly after arriving in the United States, leading to a cancellation of his meeting with President Donald Trump.

The emir, who has ruled the oil-rich Gulf state since 2006, had his appendix removed in 2002, two years after having a pacemaker fitted.

In 2007, he underwent urinary tract surgery in the US.

The emir is widely regarded as the architect of modern Kuwait's foreign policy.

A longtime widower, Al Sabah lived for years in a palace known as Dar Salwa, which was named after his daughter Salwa, who died of cancer in 2002.

He is survived by two sons.

The people of Bhutan and I offer our heartfelt condolences on the demise of His Highness Sheikh Sabah Al-Ahmed Al-Jaber Al-Sabah, Amir of the State of Kuwait.

We say prayers and wish strength to our friends in Kuwait and the Al-Sabah family to see through the tragic time.

Kuwait named Crown Prince Sheikh Nawaf al Ahmad al Sabah as its new emir, after the death of his half-brother.

"Pursuant to the provisions of the constitution... the cabinet calls upon the crown prince, Sheikh Nawaf al Ahmad al Jaber al Sabah, as the Emir of the State of Kuwait," deputy prime minister Anas Khalid al Saleh said in a televised address.

Kuwait, a nation home to 4.1 million people that's slightly smaller than the US state of New Jersey, has the world’s sixth-largest known oil reserves.

It has been a staunch US ally since the 1991 Gulf War expelled the occupying Iraqi forces of Saddam Hussein.

Today, Kuwait hosts some 13,500 American troops, many at Camp Arifjan south of Kuwait City, which is also home to the forward command of US Army Central.

Al Sabah, a longtime foreign minister for Kuwait, has drawn praise during his rule for hosting donation drives for both war-torn Iraq and Syria.

He also has been the lead negotiator in trying to resolve a years-long boycott of Qatar by four Arab nations over a political dispute.

It is a sad day! I am heartbroken to hear about the passing of #Kuwait Emir Sheikh Sabah al-Ahmad al-Jaber al-Sabah, a global humanitarian leader at a time when such leadership is most needed. I am extending my deepest sympathies to his family and the people of 🇰🇼. pic.twitter.com/hEiaIDKuqA

"He represents the older generation of Gulf leaders who valued discretion and moderation and the importance of personal ties amongst fellow monarchs," said Kristin Diwan, a senior resident scholar at the Arab Gulf States Institute in Washington who studies Kuwait.

"No question he has suffered from the lack of deference and respect shown by the younger and more brash young princes holding power today."

READ MORE: Iraq’s invasion of Kuwait 30 years ago set up the demise of its sovereignty 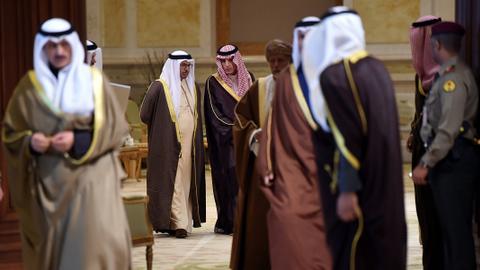