A Lebanese judge has charged central bank governor Riad Salameh with illicit enrichment, the first charge brought against the veteran governor whose wealth is also being probed by authorities in at least five European countries.

Judge Ghada Aoun told Reuters the case related to the purchase and rental of Paris apartments, including some to the central bank.

Salameh, governor for nearly three decades, denied the charge last week when contacted by Reuters, saying he had ordered an audit which showed public funds were not a source of his wealth.

Salameh, 71, has previously attributed his wealth to the investment of money made while he was a banker at Merrill Lynch before he became governor in 1993.

His tenure has faced increased scrutiny since the financial system imploded in 2019, the most destabilising crisis since Lebanon's 1975-90 civil war.

The charge looks set to exacerbate political tensions between Salameh's powerful backers and opponents in a state riven by sectarian and factional vested interests.

Judge Aoun said Salameh had not attended a hearing scheduled for Monday and she had charged him in absentia. She had referred the case to an investigative judge and it would be up to him as to whether to issue an arrest warrant, she said.

READ MORE: Saudi Arabia: Lebanon needs to step up reforms to get out of crisis

Last week, Aoun charged Salameh's brother Raja in the same case and ordered him arrested, since then he has been in detention.

On Friday, Raja Salameh's lawyer said allegations of illicit enrichment and money laundering against his client were unfounded. He called the evidence "media speculation without any evidence".

In February, she issued a subpoena for him after he failed to attend three hearings as a witness in investigations into his alleged misconduct at the central bank. But security personnel who sought to bring him to a hearing were unable to locate him.

"We certainly are in the heart of a battle against impunity," he told Reuters.

As part of her investigation, Judge Aoun has homed in on a Paris building located on the Champs Elysees, two judicial sources familiar with the investigation said.

The judicial sources said the building caught the attention of prosecutors because, according to lease contracts seen by Reuters, it houses office space rented by the Lebanese central bank since 2010.

The judicial sources said the offices were also of interest to prosecutors because they are managed by a woman named Anna Kosakova, with whom the governor has had an out-of-wedlock daughter, according to a birth certificate seen by Reuters.

Judge Aoun said she had charged Kosakova with complicity in illicit enrichment in the case - the same as the charge made against Raja Salameh.

In separate legal actions, Judge Aoun has frozen the assets of six banks this month while she investigates transactions they made with the central bank. The banking sector has announced a strike on Monday and Tuesday in protest.

Salameh is a key member of a government team that has been in talks with the IMF, though Lebanon has made scant progress towards a rescue deal in more than two years.

READ MORE: Lebanon: The anatomy of a failed state 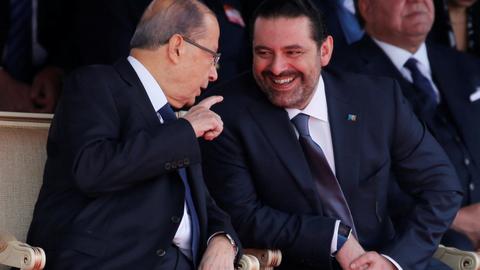