Lebanese protesters have stormed government ministries in Beirut and trashed the offices of the Association of Lebanese Banks, TV footage showed, as shots were fired in growing protests over this week's devastating explosion.

Dozens of protesters have broken into the foreign ministry where they burnt a framed portrait of President Michel Aoun, the representative for many of a political class that has ruled Lebanon for decades and that they say is to blame for its deep political and economic crises.

"We are staying here," they said.

We call on the Lebanese people to occupy all the ministries," a demonstrator said by megaphone.

The demonstrators in the foreign ministry, led by retired army officers, had stormed the building and declared it a headquarters of the revolution, but they were expelled three hours later when a large army reinforcement muscled in.

Riot police fired tear gas at demonstrators who were trying to break through a barrier to get to the parliament building in Beirut during a protest over the government's handling of this week's devastating explosion in the city.

The Red Cross said it treated 117 people for injuries on the scene while another 55 were taken to the hospital. A fire also broke out in central Martyrs' Square.

Police confirmed shots and rubber bullets had been fired. It was not immediately clear who fired the shots.

A policeman was also killed during the clashes with demonstrators, a police spokesman said.

The protesters said their politicians should be hanged and punished over their negligence that they say led to Tuesday’s gigantic explosion that killed 158 people and injured more than 6,000 others.

About 10,000 people gathered in Martyrs' Square, some throwing stones.

The protesters chanted "the people want the fall of the regime", reprising a popular chant from the Arab Spring uprisings of 2011. They held posters saying "Leave, you are all killers".

Prime Minister Hassan Diab said the only way out was early parliamentary elections to break the impasse that is plunging the country deeper into political and economic crisis every day.

"We can't exit the country's structural crisis without holding early parliamentary elections," Diab said in a televised address, echoing demands of a protest movement sparked in October that called for the removal of leaders it deemed inept and corrupt.

"On Monday, I will propose to cabinet a draft bill for early parliamentary polls," he added.

In May 2018, Lebanon held its first parliamentary polls in nine years after the deeply divided legislature repeatedly extended its own term.

But the vote failed to shake up the multi-confessional country's entrenched ruling class.

"We want a future with dignity, we don’t want the blood of the victims of the explosion wasted," said Rose Sirour, one of the demonstrators.

The explosion hit a city still scarred by civil war and reeling from an economic meltdown and a surge in coronavirus infections.

For many, it was a dreadful reminder of the 1975-1990 civil war that tore the nation apart and destroyed swathes of Beirut, much of which had since been rebuilt.

Some residents, struggling to clean up shattered homes, complain the government has let them down again.

Officials have said the blast could have caused losses amounting to $15 billion. That is a bill that Lebanon cannot pay after already defaulting on a mountain of debt – exceeding 150 percent of economic output – and with talks stalled on an IMF lifeline.

Tuesday's blast, the biggest explosion in Beirut's history which destroyed a swathe of the city, killed 158 people and wounded 6,000, the health ministry media office said on Saturday. Twenty-one people were still reported as missing.

The Dutch foreign ministry said on Saturday that Hedwig Waltmans-Molier, the wife of the Netherlands’ ambassador to Lebanon, had also died of injuries sustained in Tuesday's blast.

The Lebanese government has promised to hold those responsible to account.

'We have no trust in our government'

Some residents, struggling to clean up shattered homes, complain the government they see as corrupt – there had been months of protests against its handling of a deep economic crisis before this week's disaster – has let them down again.

"We have no trust in our government," said university student Celine Dibo as she scrubbed blood off the walls of her shattered apartment building. "I wish the United Nations would take over Lebanon."

Several people said they were not at all surprised that French President Emmanuel Macron had visited their gutted neighbourhoods this week while Lebanese leaders had not.

"We are living in ground zero. I hope another country would just take us over. Our leaders are a bunch of corrupt people," said psychologist Maryse Hayek, 48, whose parents' house was destroyed in the explosion.

Lebanon's Kataeb Party, a Christian group that opposes the government backed by the Iran-aligned Hezbollah, announced on Saturday the resignation of its three lawmakers from parliament.

"I invite all honourable (lawmakers) to resign so that the people can decide who will govern them, without anybody imposing anything on them," said party chief Samy Gemayel, announcing the move during the funeral of a leading member of the group who died in the explosion.

Macron, who visited Beirut on Thursday, promised angry crowds that aid to rebuild the city would not fall into "corrupt hands". He will host a donor conference for Lebanon via video-link on Sunday, his office said.

The prime minister and presidency have said 2,750 tonnes of highly explosive ammonium nitrate, which is used in making fertilisers and bombs, had been stored for six years without safety measures at the port warehouse.

'We can't afford to rebuild'

Some residents wondered how they would ever rebuild their lives.

Tearing up, Bilal Hassan used his bare hands to try to remove debris from his home. He has been sleeping on a dusty couch besides pieces of splintered glass.

When his three wounded teenage children ran for their lives they left blood stains on the staircase and walls.

"There is really nothing we can do. We can't afford to rebuild and no one is helping us," he said, standing beside a large teddy bear that was blown across his home, and a damaged photograph of him and his wife.

Bulldozers ploughed through the wreckage of mangled homes and long rows of flattened cars as soldiers stood by. Volunteers with shovels streamed through streets.

Danielle Chemaly said her charity organisation, whose headquarters was destroyed, had provided assistance to 70 families who were left homeless.

"We have given people initial help but we don't know what we can do for families in the future. It requires major projects," she said.

Officials have said the blast could have caused losses amounting to $15 billion. That is a bill that Lebanon cannot pay after already defaulting on a mountain of debt – exceeding 150 percent of economic output – and with talks stalled on a lifeline from the International Monetary Fund.

Senior officials from the Middle East and Europe started arriving in Lebanon on Saturday in a show of solidarity with the tiny country that suffered a deadly explosion this week that caused large-scale damage in the capital Beirut.

The visits by the head of the Arab League and the European Council president came as the country braced for large anti-government protests amid popular anger against Lebanon's political leadership. The country's ruling class, made up mostly of former civil war-era leaders, is blamed for widespread corruption, incompetence and mismanagement that contributed to Tuesday’s explosion.

France and other countries have rushed emergency aid to Lebanon, including doctors, and tons of health equipment and food. The blast destroyed Lebanon's only major grain silo and UN agencies are helping provide emergency food and medical aid.

Arab League Chief Ahmed Aboul Gheit said after a meeting with Aoun on Saturday he would seek to mobilise Arab efforts to provide support to Lebanon. Also speaking after meeting Aoun, Turkish Vice President Fuat Oktay said his country is ready to help rebuild the port.

READ MORE: Emergency aid from around the world lands in Lebanon

For ordinary Lebanese, the scale of destruction is overwhelming.

"It felt like a mini atomic bomb," said George Rohana, sitting beside a supermarket that was demolished.

Marita Abou Jawda was handing out bread and cheese to victims of the blast.

"Macron offered to help and our government has not done anything. It has always been like that," she said. 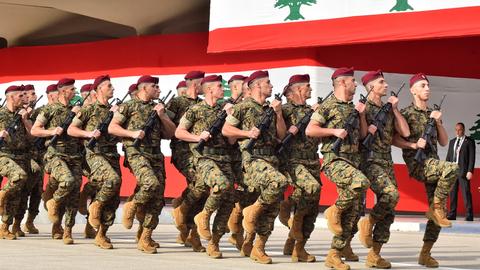