The Syrian Observatory for Human Rights says the air strikes on Raqqa have killed dozens, including 21 children. Meanwhile, a UN aid convoy was able to enter an opposition-held town with food, clothes and emergency supplies.

In Syria, a war monitor has said that US-led coalition air strikes have killed 85 civilians over the past four days in the Daesh-held city of Raqqa.

The Syrian Observatory for Human Rights added that 21 of those who died were children.

Air strikes have recently intensified in Raqqa, where the US-backed SDF have been fighting since June to drive out Daesh.

The SDF is a coalition group backed and armed by the US.  Its backbone is the YPG/PYD, which has been accused of war crimes, including ethnic cleansing and recruiting and using child soldiers, in Northern Syria by various international human rights organisations.

Turkey considers the YPG to be the Syrian branch of the PKK, which has waged an insurgency within Turkey since 1984 that has claimed some 40,000 lives.

The US, EU and Turkey all consider the PKK to be a terrorist organisation.

Syrian activists in Damascus said that a 48-truck aid convoy had managed on Thursday to enter the opposition-held town of Duma near Damascus.

The aid delivery is part of a Russian brokered "de-escalation" deal between the Syrian regime and opposition groups in the Damascus countryside.

The deal came into effect in July following meetings between the rivals in Cairo.

The UN said the aid will be distributed to 35,000 people in need in the besieged town of Duma.

Duma is part of Eastern Ghouta region, which is a rebel-held enclave in eastern Damascus countryside. Eastern Ghouta has been besieged by regime forces from more than four years. 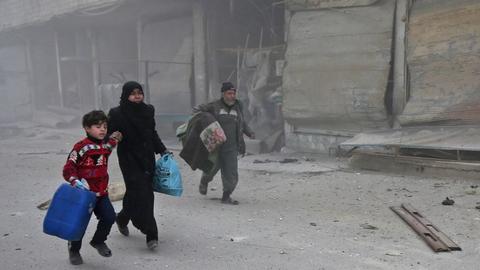