1
How likely is a revitalised nuclear deal between the US and Iran?
2
Pressure mounts on Syria, Russia to come clean on chemical weapons
3
Iran: 'Firmly determined' to salvage nuclear deal in Vienna talks
4
Erdogan: Turkey seeks to improve ties with Egypt, Israel
5
Protesters block roads across Lebanon as currency hits new low

Palestinian Health Ministry identified the teen as 16-year-old Said Youssef Muhammad Oudeh and said he was killed in the village of Odla near the city of Nablus after an Israeli force stormed the area.

The Israeli army has shot and killed a Palestinian teenager in the West Bank, the Palestinian Health Ministry said.

The Palestine Red Crescent confirmed having recovered the body of a young man.

It said another young man was wounded by the shots and had been hospitalised.

Contacted by AFP, the Israeli army said that Molotov cocktails were thrown at soldiers "during a routine operation south of Nablus".

"The soldiers acted to stop the suspects by opening fire on them," the army said, adding that no soldiers were injured and that the incident would be investigated.

.@DCIPalestine has confirmed Israeli forces killed 16-year-old Said Yousef Mohammad Odeh today around 9 pm in Odala, a village south of Nablus, in the occupied West Bank. He sustained two gunshot wounds from the behind and died soon after. pic.twitter.com/XpHsAv5ZcB

"The Israeli occupation government continues to insist on proceeding with the same policy of killings and field executions ... in contradiction to legitimacy and international humanitarian laws," Nabil Abu Rudeineh, a spokesman for the Palestinian presidency, said.

The Israeli army this week launched a massive manhunt in the northern West Bank in search of a Palestinian who on Sunday shot three Israelis, including a 19-year-old who died Wednesday of his wounds, according to Israeli news reports.

The shooter fled after opening fire at a bus station at the Tapuah junction south of Nablus.

Israeli security forces said a suspect identified as 44-year-old Montasser Shalabi had been arrested on Wednesday in the village of Silwad near Ramallah, adding that he was not a member of any "terrorist" organisation.

Palestinian sources said Shalabi is a dual US national.

The Israeli army has occupied the West Bank, a Palestinian territory, since 1967.

About 2.8 million Palestinians live in this territory, as do some 475,000 Israelis living in settlements deemed illegal by international law. 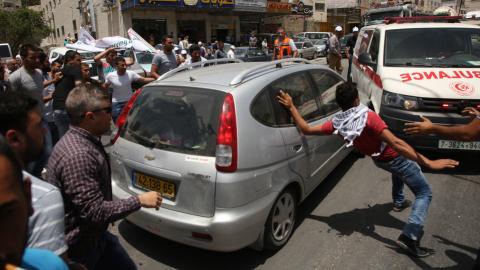 1
How likely is a revitalised nuclear deal between the US and Iran?
2
Pressure mounts on Syria, Russia to come clean on chemical weapons
3
Iran: 'Firmly determined' to salvage nuclear deal in Vienna talks
4
Erdogan: Turkey seeks to improve ties with Egypt, Israel
5
Protesters block roads across Lebanon as currency hits new low