Lebanon marks 76 years of self-rule, with protesters kicking off festivities nationwide instead of a military parade to mark what they say is a first year of "real independence."

Protesters gathered for alternative independence celebrations, converging by early afternoon on Martyrs' Square in central Beirut, which used to be the traditional location of the official parade.

Protesters have occupied the area, closing it off to traffic since mid-October.

The demonstrations that began on October 17 against proposed taxes on WhatsApp calls turned into a condemnation of the country's political elite, who have run the country since the 1975-90 civil war.

"They don’t want the country to change. They want it to stay the same and they want us to leave," said one protester who appeared in the square dressed as Charlie Chaplin and gave her name only as Joyce. "I am an actress. I don’t want to leave this country. I want to stay here, work here and live in Lebanon."

On November 22, 1943, Lebanon achieved independence after 23 years under a French mandate, following a wave of demonstrations that brought together the country's Christians and Muslims.

A post-war accord sought to share out power between Lebanon's various religious communities, but the country remained deeply divided along sectarian lines.

Hundreds waved Lebanese flags and sang the national anthem, while marches set out from different neighbourhoods in the capital toward the square, the epicentre of the protests, facing the waterfront and near the government headquarters and parliament.

The limited official Independence Day display reflects the changing mood in Lebanon, which is facing its most serious political and economic crises in years.

Leaderless anti-government protests have gripped the country since mid-October, while a deadlock among the top leaders has failed to produce a government three weeks after Prime Minister Saad Hariri resigned.

The protesters are calling for a new government and elections outside of the traditional sectarian-based power-sharing agreement.

Facing a plunging economy and high rates of unemployment, Lebanon’s young have played a leading role in efforts to topple the political elite they accuse of corruption and years of mismanagement that have left with little options but to migrate.

The leaders exchanged a few words during the 30-minute parade of marching soldiers. There was no display of tanks or helicopters and no foreign dignitaries were in attendance.

Berri and Aoun immediately left after the parade ended, while Hariri milled around for a little longer exchanging words with the commander of the Lebanese Armed Forces.

In an ominous sign, unknown vandals set fire to a large cardboard fist in Beirut’s protest camp, which had become a symbol of the uprising. The first had been painted with the word "Revolution."

Videos and photos circulating on social media showed the fist catching fire at dawn on Friday. Protesters who were camped out in the square quickly tried to put out the blaze. A single protester defiantly raised his fist in the air beside the charred effigy. 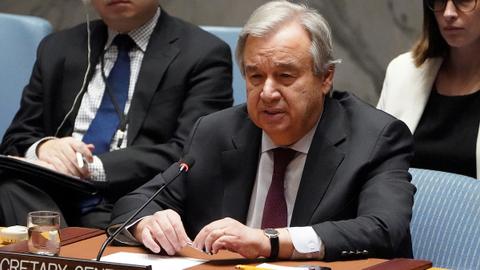