Protest in Iran at funeral of woman who died after detention

Protests broke out in western Iran at the funeral of a young woman who died after being detained by the country's so-called morality police.

The death of 22-year-old Mahsa Amini has once again put spotlight on rigid enforcement of religious rules by the Gasht-e Ershad.

Amini died in a hospital in Tehran on Friday.

Protests spread later on Saturday to the provincial capital, Sanandaj, with social media videos showing crowds chanting "Saqez is not alone, it's supported by Sanandaj".

Marchers were seen confronting riot police amid the sound of sporadic gunfire.

Authorities have launched a probe into the death of Amini, but a medical examiner said on Saturday that results of forensic tests may take three weeks, state media reported.

Police said Amini was taken ill as she waited together with other detained women at a police station, rejecting allegations on social media that she was likely beaten.

Police released closed-circuit television footage apparently supporting their version of events. Reuters could not authenticate the video, which appeared to have been edited.

Police earlier said Amini had suffered a heart attack after being taken to the station to be "educated". Her relatives have denied she suffered any heart condition.

Since the Iranian Revolution of 1979, the law requires all women, regardless of nationality or religious belief, to wear a hijab that covers the head and neck while concealing the hair.

Prominent sports and arts figures posted critical social media comments about Amini's death and protests were held in a Tehran on Friday amid a heavy presence of riot police.

As during past protests, authorities appeared to have restricted mobile internet access in Saqez and nearby areas, social media posts said.

Internet blockage observatory NetBlocks reported "a significant internet outage" in Tehran on Friday, linking it to the protests.

READ MORE: Truss deficit: Why the new British PM is a divisive figure in Iran 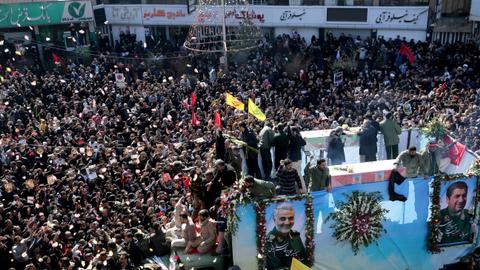 The history of US-Iran tensions, explained