Russian President Vladimir Putin made his first trip to Damascus in Syria's nine-year-old war in January this year.

Russia's Foreign Minister Sergei Lavrov has landed in Damascus on his first visit to war-torn Syria since 2012, the Syrian foreign ministry has said.

He is then expected to head onwards to nearby Cyprus.

President Vladimir Putin made his first trip to Damascus in Syria's nine-year-old war in January this year.

The Russian leader also visited Syria in December 2017 but had not been to the capital, only stopping at the Russian base of Hmeimim on the Mediterranean coast.

Russia has been a key ally of the Damascus regime throughout the Syrian conflict that erupted in 2011 with the repression of pro-democracy protests.

Moscow's military intervention in 2015 helped turn the tide of the war, with Russian air power allowing the Syrian regime to win back large parts of the country.

READ MORE: How Syria became a testing ground for Russian assertiveness and arms

Truckloads of aid to Idlib

The UN on Monday sent 39 truckloads of humanitarian aid to northwestern Syria, where millions of people are in need of assistance due to internal conflict.

The aid will be distributed among residents of Idlib and nearby rural areas.

Hundreds of thousands of people have been killed and more than 10 million displaced in Syria, according to UN estimates.

The area has been the subject of multiple cease-fire understandings, which have frequently been violated by the Assad regime and its allies.

It is currently home to four million civilians, including hundreds of thousands displaced in recent years by regime forces throughout the war-weary country. 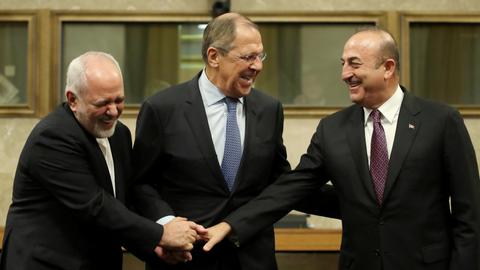