Two of Islam's holiest sites, Mecca and Medina, are now open to Muslims living in Saudi Arabia, after a 7-month Covid-19 pause.

Saudi Arabian citizens and residents living in the kingdom are now allowed to perform the Umrah pilgrimage at Islam's holiest sites, Mecca and Medina, after a seven-month pause due to coronavirus concerns.

Phase one of a three-phase reopening programme, which began at midnight on Sunday, saw 6,000 people begin performing the pilgrimage under strict social distancing measures.

Umrah is an Islamic pilgrimage to Mecca and Medina undertaken at anytime of the year.

Saudi Arabia had instituted a freeze on pilgrimage due to concerns that it could easily have become a global super-spreader event for the virus.

This figure represents 30 percent of a revised capacity of 20,000 that takes into account precautionary health measures.

The second phase launches on October 18, and will allow a maximum of 15,000 pilgrims and 40,000 in for prayer from among residents and citizens based on allocated times via the app.

The final phase starts in November and will allow visitors from specific countries deemed safe to perform Umrah at 100 percent of the revised capacity, until the end of the pandemic.

READ MORE: Hajj 2020: The economic impact of the Saudi ban on international pilgrims

Visitors can enter the mosque to pray or perform Umrah, they will have to apply and reserve a specific time and date through an online application that launched on September 27, to avoid crowding and maintain social-distancing guidelines.

Visitors can also select via the app their means of transportation and meeting points.

The Grand Mosque houses the cube-shaped Kaaba that observant Muslims pray toward five times a day.

The kingdom held a dramatically downsized, symbolic Hajj pilgrimage in July for 1,000 citizens, who were tested for Covid-19 and quarantined, rather than the more than 2 million pilgrims normally hosted for the annual event.

Official data show Haj and Umrah earn the kingdom about $12 billion a year.

The ministry said it will continuously evaluate guidelines and developments related to the pandemic.

It also plans to resume tourist visas by early 2021.

The kingdom, which opened its doors to foreign tourists in September 2019 by launching a new visa regime for 49 countries, wants the sector to contribute 10% of gross domes tic product by 2030.

"For tourist visa, until now we are talking about early next year. If things get better or if any positive developments happen with regards to the vaccine, we might accelerate and have it earlier," Ahmed al-Khateeb said in a virtual interview. 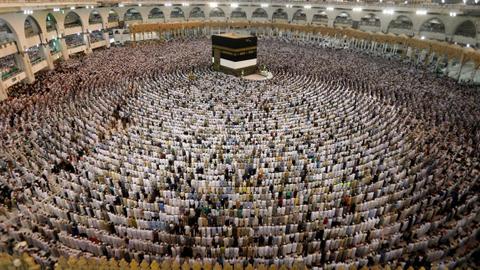