Up until recently Daesh controlled most of the province, with the exception of a part of the capital Deir Ezzor city, where the Syrian regime forces had been besieged for the past three years.

But that changed last week when Syrian regime forces coming in from the west broke the siege, with the help of Russian air strikes.

As Syrian regime forces celebrated linking up with the troops in the provincial capital, the US-backed SDF have also turned their attentions to the province.

The SDF's Deir Ezzor Military Council on Saturday announced the launch of an operation to drive Daesh out of northern and eastern parts of Deir Ezzor province at a press conference in the village of Abu Fas in Al Hasakah province.

The same day, US Combined Joint Task Force released a statement welcoming the operation by the Syrian Arab Coalition to clear the Khabur River Valley of Daesh.

The SAC is a loose coalition of Arab militants that are part of the SDF. The major part and the lead of the SDF consists of YPG.

The statement also said that the US-led coalition would support the SAC during the Khabur River Valley offensive, north of Deir Ezzor city.

The Khabur River enters Deir Ezzor province from the northeast and  joins the Euphrates River about 50 kilometres south of Deir Ezzor city.

The head of the Deir Ezzor Military Council, Ahmed Abu Kholed, who made the statement said: “The first step is to free the eastern bank of the Euphrates and the areas Islamic State (Daesh) still holds.”

Abu Kholed would not say whether there were plans to advance on Deir Ezzor city itself. “We don’t know how the battles will go after this,” he said.

He said SDF fighters did not expect clashes with Syrian regime forces, but if fired upon “we will respond.”

US Major General Rupert Jones and YPG officials held a meeting after the announcement in Raqqa, according to the SDF source speaking to local media. The same source, after the meeting, claimed that Jones said the US would not let Syrian regime forces cross the Euphrates River.

This claim could not immediately be verified and there was no immediate comment from General Jones or any other officials from the US-led coalition.

While regime forces are partly in the city centre fighting Daesh, the SDF now controls industrial areas immediately to the northeast of the city, across the Euphrates.

The progress of regime forces appears to have been temporarily halted by the Euphrates River, but according to local sources, they have started building pontoon bridges in a bid to cross the river.

Although to date there have been no serious clashes between the SDF and Syrian regime forces, on Sunday Syria's Deputy Foreign Minister Faisal Mekdad said: "The actions by the United States and the coalition led by it have no justification, for they are destroying Syria, killing civilians during air strikes and destroying the economic infrastructure."

Mekdad, who was speaking during an interview with Lebanon's Al Mayadeen TV that was reported on by Tass news agency,  said that the US "should withdraw its military personnel, otherwise the Syrian army will regard them as a hostile force."

He described the battle in Deir Ezzor as "the last big battle. This city and province are very important for us, as they are located near the border with Iraq."

Apart from the besieged Syrian regime forces, the city had up until recently been the second biggest base for Daesh in Syria for the past three years.

Turkey regards the YPG as the Syrian branch of the PKK. The PKK has been declared a terrorist organisation by Turkey, the US and the EU. 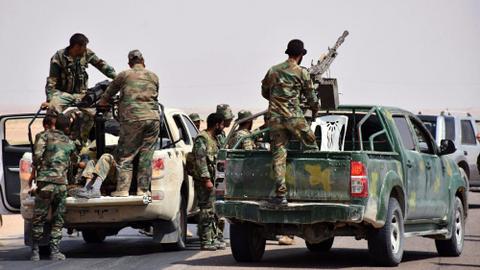