Turkey's Foreign Minister Mevlut Cavusoglu said on Sunday that he told his Russian counterpart at a meeting the previous day that attacks in Syria's northwestern Idlib region must stop immediately and that a lasting ceasefire has to be achieved.

"I have met with Sergey Lavrov and said the aggression in Idlib should stop," Mevlut Cavusoglu told reporters after the 56th Munich Security Conference.

A "permanent ceasefire" should be established, he added.

Cavusoglu also said a Turkish and a Russian delegation will meet on Monday in Moscow to discuss the latest situation in Idlib.

The meeting follows previous visits by a Russian delegation to Ankara.

Speaking in Germany after the Munich gathering, Cavusoglu also said he met with US lawmakers at the conference and added that Washington should work to improve relations with Turkey anyway, not just because of tensions between Turkey and Russia.

Turkey and Russia back opposing sides in the Syrian conflict but have collaborated on a political solution. However, a recent Syrian regime offensive in Idlib has raised tensions between Ankara and Moscow, causing them to trade barbs.

But more than 1,800 civilians have been killed in attacks by the regime and Russian forces since then, flouting both the 2018 ceasefire and a new one that started on January 12.

"What matters is today around one million people from Idlib have been moving towards our border," Turkey’s President Recep Tayyip Erdogan said in a statement on Saturday after a phone call with US President Donald Trump in which they discussed Syria and other topics.

"We are already hosting 3.5-4 million people. Unfortunately, we are not in a position of accepting this another 1 million."

On Saturday, Cavusoglu said two million people could head for Turkey's border with Syria if no ceasefire is achieved.

Hundreds of civilians have been killed while 800,000 Syrians have been forced to leave their homes to flee the offensive since December, according to the United Nations.

Turkey has 12 observation posts in Idlib as part of the 2018 Ankara-Moscow agreement made in the southern city of Sochi.

Erdogan threatened to attack Damascus if regime forces did not return to the positions agreed in the Sochi deal before the end of February after 14 Turks were killed by Syrian regime shelling in Idlib this month.

The conflict in Syria has killed more than 400,000 people since it erupted in 2011 following the brutal repression of popular demonstrations demanding regime change.

More than half of Syria's population had already been displaced, but the latest regime offensive against the country's last rebel enclave has sent the numbers soaring again. 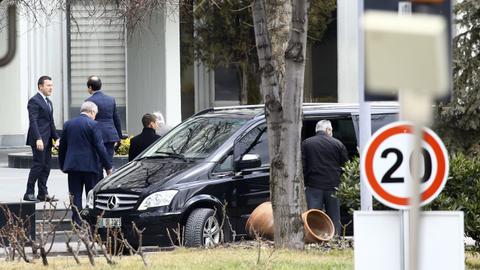