‘Abrahimic brothers’: A journey through the Jewish sites of Anatolia

Rabbi of the Ashkenazi Community of Turkey, Rabbi Mendy Chitrik, reflects on his three-week journey exploring and sharing the Jewish heritage sites across Turkey.

“We are brothers through Adam,'' said Imam Osman Demirel of Akhisar to anyone who was wondering why two Imams and a Rabbi were wandering around in the ruins of ancient Sardes, where a beautiful synagogue from the 3rd century had been excavated in the 1960s.

See, it is not often that there is adequate media and public attention to the reality of Jewish-Muslim coexistence.

Serving as the Rabbi of the Ashkenazi community of Turkey for the past twenty years — and as of late being elected as Chairman of the Alliance of Rabbis in Islamic States — gave me the opportunity to explore the rich history of brotherhood, coexistence and shared destiny of Jews and Muslims across the Islamic world - and share my experience with the world.

For the past month, I have been exploring, with my son Chaim, Jewish Heritage sites across Turkey. We have been visiting old Jewish cemeteries, synagogues, ancient inscriptions and archeological excavation sites from Ankara to Diyarbakır, from Istanbul to Mugla and anything in between, literally. After all, Jewish life has been present in Anatolia for 2,700 years! – and is still very much present today.

We covered 8,500 kilometres of paved asphalt; we visited the four “Havra Sokak” or Synagogue Street: in Antalya, Canakkale, Izmir and Gelibolu, as well as the four synagogues that were renovated in the past couple of years by the Turkish government, in Edirne, Gaziantep, Bergama and Kilis.

We prayed in ancient Jewish cemeteries that were deserted with almost no physical evidence of their existence, and others such as in Gurcesme Cemetery in Izmir where some of the greatest scholars of Judaism are interred. We toured the Izmir Jewish Heritage project, and saw the eleven ancient synagogues which are coming back to life and were received by the Governor of Kilis to a deeply moving discussion on Islam and Judaism.

But more than the physical sites of heritage, it was the friendly attitude in which we were received anywhere. Whether it was when we asked to bake Kosher breads in Cermik in the Southeast of Turkey, or when we were offered food, coffee, tea and more tea at the friendliest neighbours of the Kilis synagogue.

Busra and Mehmet fondly recalled how they were asked to help their Jewish neighbours light candles on the Sabbath, and those same neighbours in turn would refrain from eating in public during the Ramadan fast.

Walking in the streets of Adiyaman and seeing firsthand the reverence and respect the public showed towards the Syriac speaking Metropolitan Gregorios Melki Urek was deeply inspirational  — as was when we were climbing over the fence to see the century-old agricultural school “Or Yehuda” in Akhisar at Aegean Manisa Province.

Seeing and living these feelings for the past month was a lifelong lesson for my son Chaim, whose 18th birthday we celebrated on the trip, as it was a teaching experience for myself. Early on this trip I decided that this isn’t something that one should remain silent about: I live tweeted a daily thread of the days’ finding – for the world to see, including an unforgettable evening in Konya with the whirling dervishes in devotion.

There is much to see: the intimate Museum, being built and cared for by brilliant local historians in Turgutlu Kasabasi, which demonstrates Jewish life during the 1923 war; the Moris Sinasi Hospital in Manisa, names after Moris Askenazi a native of town who emigrated to the US, made a fortune in the cigarette business, and sent back a huge donation to build a hospital in his hometown, and so much more.

Too often Jewish-Muslim relations are viewed through the political prism of the diplomatic relationship between governments, or in relationship to the Israeli-Palestinian political conflict. Too often the people-to-people relationship is taken hostage by feuds which have nothing to do with the individual on the street. Many times personal relationships are obscured by hate mongering conspiracy theorists eager to spread their nonsense to wider circles (we were targeted by one of these during our trip!). This tension is magnified even more so when portrayed in local and international news outlets.

Apparently, however, the real interpersonal relationship is a whole different story, one that we were fortunate to witness with our own eyes. It is a story of human interaction, friendship, nostalgia and brotherhood.

We, being “visibly Jewish”, were walking with our Kippas (skullcap), our Tzitzits (fringed garments), asking for forgotten synagogues and cemeteries' whereabouts —  and we encountered only good people willing to help us.

It does not mean that one should blur his religious or political convictions to whitewash differences, or ignore real issues or problems. Imam Osman and I had our share of heated arguments, on politics and theology, when he hosted me and Chaim at Ulu Cami (and served us innumerable glasses of tea). But differences notwithstanding, there are many things we share, including some internal and external struggles: suspicions we harbour towards each other, and religious discrimination especially in Europe, for anti-Semitic or Islamophobic reasons.

“Brothers can fight,” I told Imam Osman. “But eventually they should make peace, sit around the same table, drink tea, for the sake of their families”.

Jews, Muslims, and Christians we all come from this part of the world. Here in Harran is where our common father Avraham Avinu, Hazreti İbrahim Al Halil, or Abraham the Hebrew, has discovered the Eternal and has committed himself and his offspring to serve Him. As we still do to this day almost 4,000 years later.

This is the land of friendship. While being different and practicing our faith differently, we are all brothers who walk and live on the same ground. Rabbi Mendy Chitrik is the Rabbi of the Ashkenazi Community of Turkey and chairman of the Alliance of Rabbis in Islamic States. 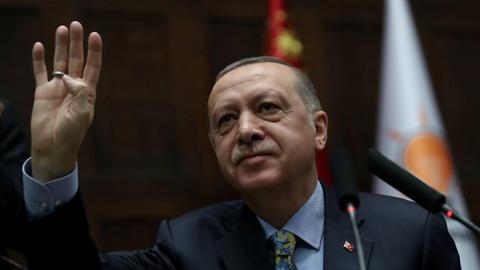