Investing in Africa is lower risk than most perceive it to be and promises high returns in more ways than one.

In 2018 Trump called Africa a continent of ‘s***hole countries’. I hope Biden will see Africa as the biggest investment opportunity America has been missing.

China has been quietly cashing in on Africa over the last 20 years seeing it as the greatest opportunity for economic advancement. It’s time America did too because capital, not aid, is what is really needed to build a self-sufficient, stable, thriving continent.

After 5 years of working as an aid worker in the early 2000s, I became disillusioned by the lack of any significant needle-moving impact NGO’s were able to make.

My conclusion: Africa needs investment. Enterprise, not charity. Ambition, not pity. Innovation, not bandaid solutions. By investing in Africa’s most promising businesses and fueling the startup culture that is energised across the continent, the US can create a significant Return on Investment, achieve more change with less funding, and compete with China at its own game.

Africa matters, which is why Beijing has keenly turned its attention towards the continent, particularly over the last decade. But unlike the US and its Western allies (who still see Africa as an aid recipient) Chinese attention has been built on funding infrastructure projects and taking shares in Africa’s corporates - often through offshore companies and intermediaries which conceal the true extent of China’s investments.

This has fuelled China’s sales pitch to the continent: Westerners think of you as destitute, war-torn, famine-ridden peoples, and don’t want to change that but rather just marginally improve it. We see you as business partners. As equals.

To compete and capture the high-growth startup opportunities that China is currently overlooking, America should follow others’ example and create a Sovereign Wealth Fund; a government-owned portfolio of investments that can deliver a Return on Investment as well as project the country’s power and influence.

America’s own entrepreneurial success should be emulated by reinvesting in entrepreneurship across the world. Just imagine the influence the US could have by empowering and funding entrepreneurship - arguably the very factor that has indeed made America great.

Ten US States already have Sovereign Wealth Funds performing this function, which makes it more perplexing as to why this has never been attempted at the federal level.

Scaling up the existing successes could be transformational: the Alaska Permanent Fund bankrolls the state’s Universal Basic Income scheme, and the Texas Permanent School Fund supports public schooling. Both receive revenues from those states’ energy sectors, but the same could be achieved through a US government-backed Venture Capital fund investing in African startups.

This would have more cross-party support than simply asking for more funding for USAID - a request that a Republican Senate would likely block in any case.

But for unconnected entrepreneurs based in Africa few such avenues currently exist which creates an enormous opportunity for investors, particularly given that 25 percent of the world’s workforce will be found in Africa by 2050.

The expected growth of African markets over the course of the next 20 years is likely to be exponential. The continent is ripe for technological development and for digital advancements.

Investing in Africa is also lower risk than many perceive it to be. There are many midsize, growing economies in the continent, run by competent governments who have reigned in corruption and increased transparency. Currency volatility is also potentially counter-acted by the possibility of out-paced returns.

The US’s Marshall Fund bankrolled development and growth in Europe after decades of conflict and war. It created the conditions for a continent-wide free-trade bloc - the EU - which was indebted, financially and politically, to its financier. This obligation was formalised in NATO, which has been the vanguard of Western power ever since.

Similarly, China is currently funding Africa’s growth beyond its recent history of hardship. Beijing has invested in everything from banks to bridges, roads and mines and is not slowing down.

Investment in the region has led to the creation of the African Continental Free Trade Area (AfCFTA) - the world’s largest free trade area, which will come into effect over the next few years.

Now, is therefore the time to invest in Africa’s companies when the continent is on the cusp of seeing extraordinary economic growth. Africa’s ability to handle Covid-19 similarly positions it incredibly well to capitalise on economic growth.

It’s been 35 years since the Live Aid concert in response to the Ethiopian famine; an event that defined Africa for a generation of Westerners. This year, Ethiopia’s GDP was forecast to grow by 7 percent.

The only thing Ethiopians - and many of their fellow Africans - are hungry for now is an equal footing in the global startup scene and the investment that will allow them to show the world what they can do. Sarah Dusek is Co-founder & CEO of Enygma Ventures, a US based Venture Capital firm investing in female-led small and medium sized enterprises in Southern Africa. 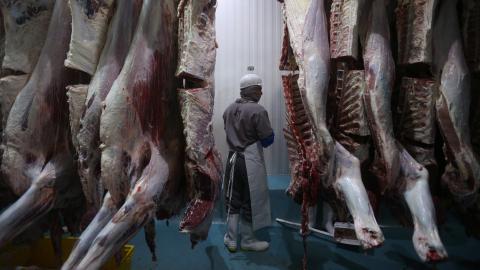 Mexican beef exporters look to Muslim markets as alternative to US