Many Muslim countries around the world have been silent or supportive of the Chinese treatment of Uyghurs. How long can they continue to do so?

The world is now pretty much divided into three camps regarding China's persecution of Uyghur Muslims in Xinjiang: those that oppose China’s repressive measures, those that support it, and those that have opted for silence.

Strangely, and somewhat counter-intuitively, all fifty Muslim-majority countries, with the exception of Turkey, have tried to navigate a path between silence and expressing public support for China’s concentration camps and criminalisation of Islam. Western countries have been forthright in their condemnation of what might constitute the most significant industrial scale persecution of a religious minority since the Holocaust.

The letter also called on China to immediately halt its arbitrary detention and allow “freedom of movement of Uyghurs and other Muslim and minority communities in Xinjiang.”

Barely 72 hours later, however, Beijing successfully coerced the ambassadors of 37 other countries, most of whom have appalling human rights records of their own, into signing a letter that expressed their support for the incarceration of Muslims in so-called “reeducation camps.”

“Faced with the grave challenge of terrorism and extremism, China has undertaken a series of counter-terrorism and deradicalisation measures in Xinjiang, including setting up vocational education and training centres,” the letter said.

The words to which these countries have signed their name to defy all reasonable belief. The accusations against China have been corroborated by thousands upon thousands of eyewitness and survivor testimonies; satellite imagery, and an array of leaked videos and documents, many of which show the destruction of mosques and evidence that Chinese authorities have banned the practice of Islam in public places.

Among those destroyed was the Imam Asim shrine, which had attracted thousands of Uyghur pilgrims each year.

The demolition of mosques is the tip of the iceberg when it comes to China's brutal crackdown on the 12 million Uyghur Muslims who live in Xinjiang, however, with accounts of torture, forced marriage, and adoption and sterilisation programs as common as they are credible.

To make matters worse, a further thirteen countries have added their signatures to the other 37 that have expressed support for China’s cultural genocide in northwestern China, with Iraq, Iran, Somalia, Djibouti, and Palestine among the additional signatories.

Yes, Palestine! If there were ever a people who are familiar with the brutality of being confined to a steel guarded cage, it’s the Palestinians, and it defies belief that the Palestinian Authority would willingly put its name to China’s Muslim concentration camps.

These Muslim-majority countries have effectively agreed with China that Islam is a link to terrorism, and that Muslims in Xinjiang have only themselves to blame for their terrible fate.

If that wasn't bad enough, then consider how the Chinese Communist Party has made a further mockery of their support by moving to ban any visibility of Islam in the capital Beijing, with authorities ordering halal restaurants and other businesses to remove Arabic script and any symbols associated with Islam.

Until recently, leaders of many Muslim countries chose to either stay silent on China’s crackdown on Muslims or pretend they know nothing about it when pressed by international reporters, as typified by Pakistani Prime Minister Imran Khan who replied, “Frankly, I don’t know much about that” when asked by the Financial Times how he felt about China’s treatment of Uyghur Muslims.

Others have done far worse, however, and by worse I mean actually parrot Beijing’s propaganda.

For instance, Saudi Arabia’s Crown Prince Mohammad Bin Salman (MBS) told reporters in February that, "China has the right to take anti-terrorism and de-extremism measures to safeguard national security,” and in doing so mimicking the very kind of post 9/11 “War on Terror” discourse propagated in the US and used by countless governments to commit crimes against Muslims.

In defending China's 'right' to persecute Muslims on the basis of fighting "extremism," the Saudi government has affirmed the worst kind of Islamophobic trope: one that falsely posits Muslims to be uniquely or exclusively vulnerable to radicalisation because of their faith. Muslim-hating far-right groups and individuals around the globe can now say, "See, even the Crown Prince of Saudi Arabia thinks Islam is a gateway to terrorism!"

If Saudi Arabia, a country that boasts of being the “gatekeeper of Islam,” and Pakistan, a country that was established in 1947 on the very notion of being a refuge for persecuted Muslims, and one that shares a border with China, are unwilling to condemn or even affirm Beijing’s cruel mistreatment of Muslims, then who will?

That the United States, a country that has bombed and invaded more Muslim majority countries in the last two decades than there are days in the week, has done more to rally international solidarity for Muslims in China should deeply embarrass every political leader in the Muslim world.

For many Muslim countries, China offers an economic carrot too hard to ignore. Not only is the Asian superpower Saudi Arabia’s largest trading partner, but also Imran Khan has gambled Pakistan’s future on Beijing’s deep and expansive wallet.

Sadly, Muslim solidarity is something that exists in name only, and when invoked by political leaders in the Muslim world, it lasts only until the announcement of the next bilateral economic trade deal.

Who will save the Uyghurs? 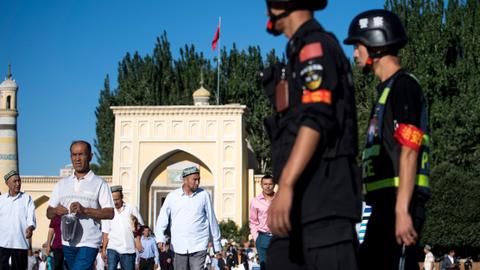