Britain and Israel celebrate the centenary of the Balfour Declaration as Palestinians face a brutal occupation.

On November 1, 1917, Lord Alfred Balfour, the British foreign secretary, made a pledge that Britain will help and facilitate the establishment of a Jewish homeland in Palestine – setting in motion the events that led to the 1948 creation of the state of Israel and the dispossession of the Palestinians from their homeland.

A century later, Britain refuses to apologise for the declaration’s catastrophic consequences which have befallen and continue to destroy Palestinian lives. On the contrary it will mark the anniversary with pomp and ceremony. Triumphal statements of celebratory pride reminiscent of colonial victories against the weak races of faraway conquered lands will be the order of the day.

The unfolding scenes this week across the UK, but particularly in London, invokes the ugly ethos that drove colonialism to subjugate indigenous nations across the non-white continents by the self-declared superior race in the name of a “civilising mission”.

Conquering “the natives” to bring them into civilisation, as racist as it is, has been the pretext, albeit under different guises, to justify colonial intervention up to the present day. The Balfour declaration is no exception. It served British imperial ambitions that saw the Zionist movement as a valuable immediate and future strategic ally.

According to historians, Britain needed the help of the Zionist movement during World War One, believing it to have significant influence among American Jews in order to draw America into the war. The promise of a Jewish homeland was seen as necessary to entrench British influence in the region, in particular unchallenged access to India.

The British however reneged on a 1916 promise made by the British High commissioner in Egypt, Lord Henry McMahon, to the Sharif of Mecca Hussein bin Ali to support Arab independence in return for help against the Ottoman Empire. Instead, replaced with a promise only a year later to establish a state for the Jews in Palestine. Understanding British duplicity was still a new precept to local Arabs.

The contradictory pledges suggest that the British Empire decided a Palestine run by Zionists, engaged in transferring European-Jewish settlers to Palestine, would be a better ally than an Arab-Muslim Palestine. The British state gave political cover for Zionists to begin the forceful demographic change it had long sought.

Zionism being a colonial-settler movement itself, had no problems presenting itself as part of the European colonial project. The bearers of the enlightenment torch in a sea of darkness. A garrison for European colonialism. In the words of Theodore Herzl, the founder of political Zionism, a Jewish homeland in Palestine should “form a portion of a rampart of Europe against Asia, an outpost of civilization as opposed to barbarism.” The Europeans for their part were happy to deal with the “Jewish question” by simply exporting it.

The Balfour Declaration was a historic triumph for Herzl’s vision.  It marked the integration of the Zionist plans into British colonial ambitions. Four years after the declaration it was put into action with the setting up of the British Mandate over Palestine designated to facilitate the formation of the promised Jewish homeland.

The British mandate over Palestine was established in 1923 and ended with the creation of the state of Israel in 1948. It was entrusted with supporting and setting up colonies for Jewish immigrants and training Zionist armed gangs that were responsible for perpetrating bloody ethnic cleansing operations against the Palestinians. The colonial project, continues, delving deeper into the Palestinian bantustan in what’s left of historic Palestine.

Documented massacres committed by the British-trained Jewish gangs accompanied by ruthless British mandate suppression of Palestinian resistance unfolded against the backdrop of a Zionist colonial expansion. All a deliberate consequence of the fatal 67 words that constituted the Balfour Declaration.

The British government to this day takes pride for that statement even as the deadly consequences unfolds for Palestinians. The legacy which Winston Churchill exemplified as “the superiority of the Aryan stock” when calling for the use of “poisoned gas against the uncivilised tribes” in order to quell the Kurdish rebellion against British rule.

The crude revival of that colonial ethos is now portrayed as Lord Balfour carrying out a magnanimous act to save Jews from prosecution leading to the creation of Israel. Let’s not forget that this so called act of mercy was to save Jews from that very European disease, hatred of Jews. Indeed Lord Balfour himself, oversaw the formulation of the 1905 Aliens Act which had the aim of limiting the number of immigrants, most of whom were Jews, fleeing from persecution in East Europe.

The creation of Israel far from being aimed at saving Jews was part of a continuous anti-semitic world view that saw Jews as an alien element with no place in Christian Europe.

The end result was a state that emulated colonialism better than the British could have imagined. Apartheid, racism, collective punishment, ethnic cleansing, displacement, misinformation, demolition and de-humanisation were learned by the Zionists from the British.

The official celebrations commemorating the centenary of the Balfour declaration, which according to the organisers will bring together “Christian and Jews”, is being held in London’s Royal Albert Hall. Presumably there won’t be Christians and Muslims who suffer as the result of that declaration whitewashing the destruction of Palestine with a false facade of civility. That would be impolite. How British!

But there is hope. The Labour party in Britain under the stewardship of Jeremy Corbyn will boycott what is clearly a political charade. A welcome, if not overdue, recognition and reversal of decade old policies that stood in support of the Zionist project and against Palestinian self-determination by a major political party.

This will be in contrast to the stance taken by the embattled Conservative British Prime Minister Theresa May who will host a special dinner with Israeli Prime Minister Netanyahu, this coming Thursday.

The late Jewish Labour member of parliament, Gerald Kaufman, had this to say about the pro-Israeli stance of the Conservative party: “It’s Jewish money, Jewish donations to the Conservative Party – as in the general election in May – support from the Jewish Chronicle, all of those things, bias the Conservatives.”

Lord Balfour was also part of the Conservative Party these historical links and networks continue to impact and shape British attitudes to the Palestinian conflict.

This is also a moment for Palestinians, Arabs and all believers in equality, to engage in serious and worldwide mobilisation to place pressure on Britain to stop supporting Israeli occupation, and to step up the Boycott, Disinvestment and Sanctions campaign that has Israel so afraid.

All of the forces and personalities in Britain that came to shun the Balfour ceremonies form a nucleus for a broad global movement, to bringing the British government to account for its past. More importantly, to halt its present role as enabler by aiding Israel.

Let us make sure that the moment of joint British imperial arrogance and Israeli glory does not turn into a triumph. And to support the right of Palestinians to self determination. Lamis Andoni is a journalist, analyst and commentator on Middle Eastern and Palestinian affairs. 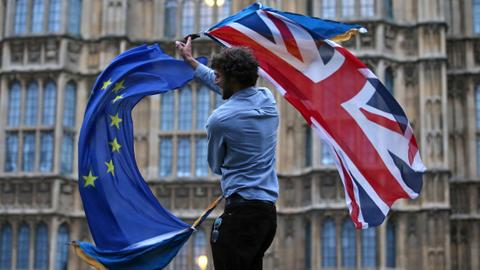 Is a divided Britain changing its mind on Brexit?