Congo's elections were neither free or fair - that they even happened was a small success.

The Democratic Republic of Congo has a habit of breaking my heart.

So much natural beauty, so much potential, and yet one horror after another across history: the brutalizations of the colonial era; the assassination of Patrice Lumumba; the long reign of Mobutu Sese Seko; armed conflicts and mass rapes in the mineral-rich great lakes region on the eastern border; repeated outbreaks of Ebola; and Joseph Kabila’s defiant refusal to hold constitutionally-mandated elections after his two terms in power. Most recently, the contested election and inauguration of Congolese President Felix Tshisekedi.

The level of disorder and destruction is readily apparent to those, like me, who are now observing from a distance as advisors and researchers. But perhaps this is apparent especially to me as I spent several years of my youth in the DRC.

But in the past year, in the midst of conflict and despair, two bright points appeared.

The first is Dr Denis Mukwege shared Congo’s first Nobel Peace Prize in 2018 for his work with rape victims at Panzi Hospital in Bukavu. This is especially important as the DRC, sometimes labelled the “rape capital of the world,” was rated second in sexual violence—and seventh overall—in a recent Thomas Reuters’ experts survey on countries that are most dangerous for women.

Then in the final days of 2018, after innumerable delays, the DRC held the general elections that should have been held when Kabila’s term expired in 2016.  With this election, nearly 60 years after independence, Congo seemed about to experience its first peaceful democratic transition.

To be sure, the election was deeply flawed in normal and not-so-normal ways. Some polling stations opened late, voting waiting times were often long, and voters sometimes found that their names were not on the election list. Many reported difficulty with the mechanics of voting; this is also fairly normal in countries both rich and poor. This is all pretty normal in poor countries.

The election was delayed for a week because of a warehouse fire that destroyed many voting machines. This is not so normal.

Elections were postponed in three cities -- allegedly because of Ebola and ethnic conflict-- until March 2019, well after the inauguration of the new President and National Assembly. This is definitely not normal.

And yet hope once again began to give way to despair as internet access was turned off and the people waited in “radio silence” for election results to be announced and then to be made official.

Distrusting election officials, or perhaps hoping to stiffen their spines, the Catholic Church had deployed a massive election watch program and after some delay began releasing tidbits suggesting that there was a clear winner.

When the election commission finally announced a winner, the result did not comport with polls conducted shortly before the election, the Catholic Church’s results, nor with the leaked data from voting machines.

But the result was also not what Kabila would have hoped.  His candidate, Emmanuel Shadary, clearly lost. But somehow Kabila’s very popular nemesis, Martin Fayulu, did not win. Instead, Tshisekedi, who had trailed far behind Fayulu in the polls, was declared the winner.

Many are left wondering what to conclude here. It is possible the Electoral Commission and the Constitutional Court enabled a “constitutional coup d’état,” as Fayulu, the popular nemesis and perhaps-election-winner, suggests.

Or perhaps it can be framed instead as a set of baby steps stumbling toward democracy. Many are left wondering what comes next if there’s little option but to accept the latter framing, as more and more African leaders move from urging a delay to congratulating Tshisekedi.

For example, democracy in Congo may be analogous to the right to health asserted in the 1948 Universal Declaration of Human Rights.

Although reaching consensus on an expansive right to health and securing the inclusion of this right in the UDHR initially seemed like a monumental achievement, the UDHR was much more a call to action than a declaration of how the world would function from there going forward.

Yet it did begin to spur both new legal rights and also non-legal routes to meaningful rights, including the right to health.

The elation of the UDHR dissipated over the next two decades.  Those words declaring a right to health, endorsed by every nation, did not immediately translate into access to health care, let alone the much more expansive right to the highest attainable standard of health.

With the 1978 Declaration of Alma-Ata and the 1986 Ottawa Charter for Health Promotion, though, the focus has shifted from reaching consensus on lofty ideals to making the right to health real. This comes from specifying expectations tailored to levels of development and available resources, mandating that countries take the steps that are possible, insisting that richer countries help poorer ones, and creating mechanisms for reporting and accountability.

What is also necessary is attention to the mundane nuts and bolts of creating plans, tracking indicators, and developing infrastructure. This has brought such important benefits as a fuller understanding of the underlying determinants of health, increased access to essential medicines, judicial enforcement of rights to healthcare, and pressure on donor countries to help strengthen the health systems of poorer countries rather than merely contributing to specific programs.

Economist and philosopher Amartya Sen suggests that rights, conceived by philosopher Jeremy Bentham as “the child of law,” can sometimes instead be “the parent of law.”

Taking these lessons back to the Congo’s general election suggests that a completely transparent and fair election on the first go should never have been the expectation. Unlike in previous elections, the efforts of the Catholic Church, the use of voting machines (which can, of course, also be rigged), and the involvement of election monitors likely prevented a worse outcome and offered some evidence on just how unfair the election was.

Yes, there was foul play—almost certainly a lot of foul play. But at least there was an election. That fact increases the odds that there will be another one, hopefully occurring in a more timely manner, with fairer procedures, and much more transparency.

Just as past declarations of principle, such as the UDHR, did not immediately realise the rights they asserted, so too the right to democracy in Congo has not been immediately recognised.

The work ahead is the same as the work that has broadened and helped to realise the universal right to health in the years since the UDHR. And that is building new legal frameworks to implement these lofty goals, and supplementing them with the hard work of nongovernmental and civil society groups to ensure that those asserted democratic rights can become reality. Carol A. Heimer is Professor of Sociology at Northwestern University, Research Professor at the American Bar Foundation and a Public Voices Fellow of the OpEd Project. A sociologist with expertise on the interface between law and medicine, she grew up in the DRC and serves on the Council of Advisors of Education Congo. 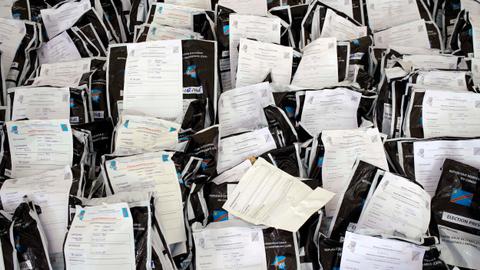