The international community mustn't be lulled into a false sense of security and should take this opportunity to push for an end to the war.

Although Ethiopia announced it would end its assault on the Tigray region and accept a ceasefire with the separatist Tigray People’s Liberation Front (TPLF) on June 28, a dire, yet preventable humanitarian crisis has been left behind, while peace is still far from a reality.

When Ethiopia’s President Abiy Ahmed sent the air force and troops into Tigray last November, backed by Eritrea’s army and ethnic Amhara militias, it was part of a long-standing conflict.

Now, the legacy of Ethiopia’s Nobel Peace Prize Laureate President is in tatters. His forces have adopted collective punishment on the Tigrayan people, triggering another “forgotten” human catastrophe, which has begot a concerning international indifference.

Thousands have been murdered, and millions have been uprooted from their homes. There is also substantial evidence that Ethiopian troops have utilised famine and starvation as weapons of war. Tigrayan civilians have accused the armies of stealing crops and livestock and blocking aid.

While this collective punishment could be considered as ethnic cleansing, the violence in Tigray could also meet the requirements for definitions of genocide.

Reports of torture and sexual assault are widespread. Over 22,500 women are estimated to need treatment after sexual violence, although the real figure is likely much higher. Meanwhile, around 900,000 people are at risk of famine, while five million need urgent assistance. Tigray suffered an unbearable famine in 1984, where over one million people died, and the recent escalation could replicate a similar crisis.

Testament to the fact that the humanitarian disaster was manufactured was the murder of three aid workers from Doctors Without Borders on June 25. This was no accident nor mere collateral damage from the war; in February, Ethiopia even dismantled the boards of Tigray’s leading humanitarian groups.

Amid this horrific carnage left in the wake of the eight-month war, heavy fighting rages on within Tigray. On June 28, the TPLF announced it had seized the autonomous region’s capital city Mekelle, after capturing the airport and three key checkpoint roads leading into the city.

Widespread fireworks and cheering across Mekelle showcased the deep psychological distress that these eight months of conflict have triggered. Indeed, the TLPF lauded the move as a victory against Ethiopia’s assault to dislodge the rebels.

Despite these celebratory images, which one might associate with a clear end to the war, it could be the onset of prolonged violence.

The TPLF vowed to drive out Ethiopian troops from the entire region, as the group’s spokesperson Getachew Reda pledged that they would “stop at nothing to liberate every square inch” of Tigray while slamming Ethiopia’s ceasefire as a “sick joke”.

The opposition forces have therefore not relented on their campaign, having stormed the city of Shire on Tuesday, which forced the Ethiopian military into retreat.

This means that the conflict is far from over, as Ethiopia could also restart the conflict. Revealing the ceasefire’s futility, Ethiopia said it could be forced back into the war in Tigray within weeks.

The ceasefire announcement should therefore not deceive observers, as it grants Ethiopia an opportunity to regroup its forces.

Eritrea, which backed its neighbour Ethiopia, claimed it withdrew its troops from the region, signifying that Addis Ababa could be isolated in its efforts to crush resistance in the governorate. It is also uncertain whether Eritrea will abide by the ceasefire, given its historic antagonism towards the TPLF. As Eritrea also happens to be one of the most repressive countries, its media blackout has made it difficult to gauge the extent of its involvement in the country.

In any case, Ethiopia has decisively lost the moral battle in Tigray, and continued international pressure could be a key in helping to stop any future assault.

Much of the international community has quite rightly denounced the atrocities committed in Tigray. The United States’ role is particularly crucial, given that Ethiopia is a strong ally of Washington and is its main security partner in the Horn of Africa. Their alliance, however, is underpinned by strong military and intelligence cooperation, particularly driven by Washington’s desires to counteract the Al Shabaab extremist group in Somalia.

Though the US condemned Addis Ababa’s atrocities and welcomed the ceasefire, while even imposing sanctions on Ethiopia, the US has thus far yet to provide real pressure. After all, the US said it still supports Ethiopia’s territorial integrity, which suggests it would prioritise its security partnership with Addis Ababa.

The Biden administration could instead leverage its financial and military ties with Ethiopia as a form of pressure. And countries like Russia, China, and the United Arab Emirates, which have courted Ethiopia’s regime, would struggle to compensate for the US’ strong leverage over Addis Ababa, meaning that the ball is truly in Washington’s court.

A lack of serious international effort to push for an end to the crisis could guarantee a prolonged conflict between Ethiopia and the TLPF. Even more worrying, Ethiopia’s failure to make peace with the opposition may once again destabilise the country. Aside from the unimaginable regional carnage, it would also undermine Washington’s desires to use Ethiopia as a key regional ally.

Instead of the startling silence we have seen, this massacre should instead be a wake-up call for the world. Continued tolerance for Ahmed would not only damage the Nobel Peace Prize’s credentials, but also leave a bloody stain on the international community’s conscience. 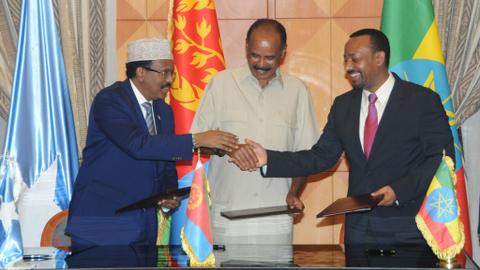