Evidence that our planet is teetering on the edge of disaster is everywhere to be seen.

Today alone there is news that more than 100 wildfires are burning in New South Wales, choking Sydney's residents. Even as much of the coastline there is ablaze, devastating floods are engorging key cities in New Zeeland with more rain set to fall.

It isn’t even 10 o’clock and I’ve heard the story of a young woman who clung to a tree for three days with her newborn in Mozambique as she waited for floodwaters to recede - not knowing if thirst, hunger or disease would kill her first.

I’ve seen a young man scream in outrage that in some smaller Pacific Island nations the full moon now causes water to start bubbling up from the ground inland, making it clear that time has all but run out on their way of life.

Later today this sense of urgency and outrage is going to spill into the streets of Madrid, as thousands of activists – including Greta Thornburg – yet again demand urgent action.

For the growing echo of voices crying out for change, however, the first week of the COP25 negotiations has begun with little more than a whimper. Talks, for the most part, have been going around in circles and petty political squabbles are unfortunately winning the day.

When it comes to climate the world is largely divided into three distinct political blocs.

There are the rich countries – made up of the US, EU and places like Japan and Australia – who bear the most responsibility, historically, for climate change and many believe must play the most significant part in setting the course.

While they recognise the role they must play in theory, they’re holding up the process on technicalities and increasingly looking to the private sector in an attempt to avoid shouldering the burden.

Then there is the G77 + China bloc, made up of countries like India and Brazil that are rapidly industrialising. They’re more than happy to recognise the climate crisis, but they think the rich countries – which have already reaped the benefits of mass fossil fuel use - must cough up and lead.

As the two large blocs squabble, the Least Developed Countries, have been left shouting from the sidelines that their homes are sinking and their farms are turning to deserts. They’re urgently calling on wealthy nations to give them the resources they need to develop their Nationally Determined Contributions, or NDCs, which all countries vowed to develop at the Paris Climate Accords in 2015 and finalise before COP26 in 2020.

The plans are meant to demonstrate how countries will cut emissions and also adapt to climate change to reduce the impact on their populations before it is too late. The idea is simple – we need to see action on three fronts; mitigations that stop emissions; an adaptation that helps people and ecosystems become better able to cope with the effects of global heating, and loss and damage which provides resources when events overwhelm efforts to adapt.

It is estimated that around $100 billion – which is to be distributed through the UN’s Green Climate Fund and other mechanisms - is needed by the end of next year to avert catastrophe. So far, only about $71 billion has been committed, most of which have focused on mitigation.

In some ways this is understandable, converting a coal power plant to gas or a wind farm, is tangible. You can quite literally see the progress take shape and it helps to ease the conscience of the big polluters. Keeping global heating to 1.5 degrees would be the single most effective and efficient way of facing the crisis.

The issue of loss and damage is much harder.

It means that rich countries must respond to crises with money and resources, which will allow states to build new economies and infrastructure to replace those destroyed. As climate breakdown progresses, the need for these funds increases. At this COP there may be a breakthrough in deciding how these funds can be collected and distributed. The big challenge is to ensure these funds are new and on a sufficient scale.

The often ignored issue of adaptation is probably the hardest of all. It is in effect future-proofing communities, some of which are in countries thousands of miles away, to avoid the worst. It aims to provide them with the skills and knowledge they need to survive. By ensuring millions do not lose their homes or their lives, adaptation has the true potential to transform the prospects of the world’s poorest.

Earlier this year, I met Mohammad a once-wealthy farmer from Bangladesh who had been displaced 18 times in 20 years and left penniless. When the rising waters took his first farm, he simply took his savings to buy more land nearby.

Every time this happened, he grew poorer and poorer but lacked the understanding to know that he was fighting a losing battle. I keep thinking how drastically different his life would have been if he had been given a fighting chance to act and adapt while he still had the agency to do so.

Today, there are millions of people just in that part of the world who are facing a similar fate and we’re again failing to give them a chance. The consequences of not doing so will be far worse than I can even bring myself to imagine.

By working with a dedicated coalition of NGOs, Islamic Relief has been fighting to ensure that this issue of adaptation is not ignored. Working together, we have raised it time and again in negotiations to ensure it continues to be one of the key, legally binding, commitments of Paris.

For now, we have succeeded but with negotiations expected to drag into next week, nothing is certain and the future of our planet remains in peril, held hostage by the very same negotiators who have the authority to lead us out of this crisis. 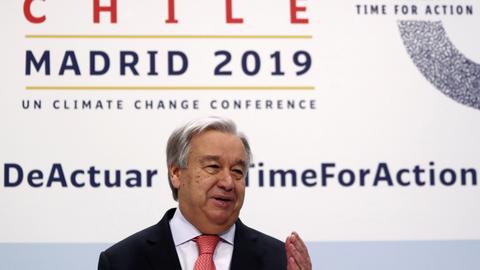 UN chief warns of 'point of no return' on climate crisis