Turkey leaves its local elections behind, covered by national and global media outlets. But the question remains: does Western media understand local dynamics?

As the election results rolled in on a cold Sunday night in Istanbul, watching the Turkish media coverage, one could not help but be immediately struck by how fiercely competitive the campaign turned out to be. The significance of the results for the political future of Turkey remains to be seen and will no doubt be debated intensively by pundits and party loyalists for the foreseeable future.

From the perspective of an outsider however, with all the flaws that inherently accompany all political systems around the world, for what it’s worth it is difficult to understand how these elections can been seen as anything other than a demonstration of a vibrant political culture and an exemplary exercise in democracy.

In the district of Uskudar, where I live in the Asian side of Istanbul, leading up to Election Day the open contentiousness of these elections was apparent. Speaking to people on the street, I got the sense that while at times brutally competitive, politics in Turkey, from the local to the national level is - to put it lightly - lively. In my neighbourhood alone I spoke with people who espouse views ranging from what amounted to strong and deeply engrained oppositional views, to partisans of the President and his AK Party, to more nuanced views that occupy a less committed middle ground.

The point being, like many places, including my homeland of Canada, politics are a complicated affair, and have a tendency to bring deeply held and often contentious beliefs to the fore. This is particularly true in a country like Turkey, which continues to face difficult political and security challenges unknown to most in the West.

However, if one were to rely solely on Western mainstream media for their framing of the elections in Turkey, there’s a good chance that the casual observer would walk away with the perception that Turks are living under a dictatorship with zero tolerance towards any form of political opposition.

In fact, a study of media coverage of the 2018 presidential and parliamentary elections in Turkey revealed that the “dictatorship frame” was present in 56 percent of the articles sampled.  The results of the March 31st elections, let alone those of the general elections held last June, clearly fly in the face of this framing.

Politics are a messy game

By all accounts, the stakes for these local elections were unusually high. Facing economic uncertainty exacerbated by external pressures and a highly unstable geopolitical environment, the results of these elections were seen by many inside and outside of Turkey as a bellwether for the future political direction the country may take.

In high-stakes elections around the world, competitors manoeuvre in ways that they believe will give them the most advantage. This is as true for the United States, Canada and the UK just as it is for Turkey. However, for reasons that go beyond an ostensible concern for democracy, anything and everything in Turkey is microscopically examined in a way that it isn’t elsewhere, and, as if that were not enough, the lens that is used is one that seems to assume that the government somehow represents an inherent threat to the democratic process.

Take for instance a story that was reported on March 16th by leading media outlets in Turkey. Leading outlets like the Hurriyet, CNN Turk and Posta all ran headlines with an apparent quote from HDP co-chair Sezai Temelli saying that “Istanbul and Ankara will be run by HDP, not by CHP candidates,” described by CNN Turk and Hurriyet as an open threat from the HDP.

Many in Turkish media circles were quick to point out that no such statements had in fact been recorded by the HDP co-chair, however, the fact that the headlines were run by private media outlets seemed lost on those who sought to frame the event as part of government plot to undermine the main opposition, rather than taking it for what it would be taken for in any other democracy, messy politics.

The fact that such an occurrence, not uncommon in the course of a high-stakes political game, was taken as evidence that the government is controlling Turkish media is indicative of the level of hysteria that has dominated reporting of Turkey particularly since the failed coup attempt of July 15th, 2016. Anyone who spends even a marginal amount of time in Turkey and is keen observer of political dynamics here knows that such claims are an erroneous oversimplification at best.

Post-election coverage has been dominated by a perspective that seeks to frame the elections as a major defeat to Erdogan. While losing the capital Ankara and possibly Istanbul undoubtedly represents a setback for President Erdogan’s AK Party, it is far from a ‘major defeat’ (the AK Party and its allies received over 50 percent of the vote nation-wide).

Furthermore, the fact that the AK Party made significant gains in Kurdish dominated areas in the country’s south-east has also been treated as insignificant largely because it does not fit the narrative of Kurdish oppression that has been so prevalent in Western media.

Western media coverage of the local elections in Turkey has been minimal as compared to the presidential and parliamentary elections held last summer, however, the often hysterical tone and oversimplified narrative remains apparent. 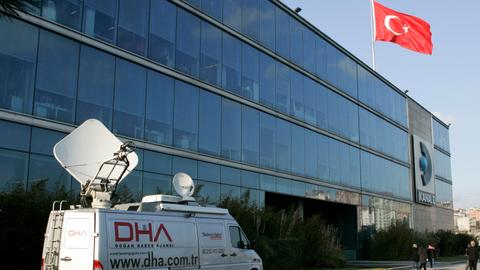