The “right time” to restore statehood will likely be when India’s ruling BJP has irreversibly altered Kashmir.

The complete restoration of the statehood of Jammu and Kashmir (J&K) would come “at the appropriate time”, said Indian Prime Minister Narendra Modi in response to the Kashmiri leaders’ plea for the restoration of Article 370 last week.

This came in a multi-party meeting summoned by PM Modi. Previously, Home Minister Amit Shah has also made similar remarks. It has become a habit of the Bharatiya Janata Party (BJP) government to make such statements. However, nobody seems to know what time the BJP deems appropriate.

While the fate of over 12 million people hangs in uncertainty, vague nomenclature treads the Kashmiris’ toes regularly.

The Prime Minister invited 14 Kashmiri leaders for the meeting from the National Conference, People’s Democratic Party (PDP), Indian National Congress and BJP, including four others who demanded full restoration. The meeting was a clear signal of the government’s conciliatory mood regarding restoration. But the question remains when and in what form.

Kavinder Gupta, one of the meeting attendees from BJP J&K, was recorded saying post-meet that one should not even think of restoring Article 370 itself.

Such statements somehow imply “restoration,” but stripped of all the provisions under Article 370.

Besides, the government’s insistence upon constituency delimitation in Jammu and the Kashmir Valley; and an election before the restoration also informs the picture that the government might have in mind for the new Kashmir.

A delimitation commission for J&K was established in early 2020, tasked with the responsibility to demarcate electoral constituencies of the region per the 2011 census, roadways, geographical impacts and the representation of Scheduled Castes and Scheduled Tribes.

This could mean a considerable change in the electoral outlook of J&K. The commission’s plan, as known so far, incorporates seven new constituencies for Jammu.

Before the abrogation of Article 370, the region had 109 constituencies in total: 46 of them were from the Valley and 37 from Jammu. The remaining 24 were vacant, kept for Pakistan- administered Kashmir, while two were from Ladakh.

With seven additional constituencies in Jammu, the tally would go up to 116. There is a seemingly communal nature to the demarcations. Jammu is a Hindu-majority area that could give great electoral leverage to BJP and its like-minded parties, if at par constituency-wise with the Valley.

Not to say that there can be no alliance between BJP and traditional Muslim political parties, as it shared a coalition government with Mehbooba Mufti’s PDP until it withdrew its support for Mufti in 2018.

The government might be looking for far more favourable electoral terrain.

This leverage, over time, will be further strengthened by the new domicile rules that BJP put into place last year. Owing to the new arrangement, one is considered a state citizen having lived there for 15 years. Property rights and education quotas will also be granted likewise. This is seen as a means for the BJP to fashion itself an advantageous demography in Kashmir.

This is accompanied by the attempts at the mass repatriation of 6,000 Kashmiri pandits, who started moving out of the region after 1989 and continued to do so until the 2000s because of communal violence that killed around 399 pandits.

While the community must be reinstated, no successive government could succeed in this. This time around, they are used once again as a scapegoat for Hindu nationalists’ electoral gimmicks, which would further bifurcate the region on a communal basis, like the rest of India, to the BJP’s advantage.

It is imperative to analyse what the BJP thinks is negotiable when it opens the door for talks. Ghulam Nabi Azad, a former Chief Minister, told the media that many things, including the restoration of statehood, rehabilitation of pandits and domicile rules were discussed in the meeting. The prime minister restrained from providing a single satisfactory response.

Meanwhile, mainstream politicians of Kashmir have a history of losing the cause on the table. For instance, the constituent Assembly of Kashmir under Chief Minister Sheikh Abdullah of the National conference ratified the disputed instrument of accession in 1954. India uses this ratification as the final rebuttal of its plebiscite obligations to date.

There might be a lot that Kashmiris could lose through current engagements as well, while a phoney restoration of the statehood, devoid of Article 370, is hailed as a potential victory.

This is how it imagines the appropriate timing: When the region is irredeemably communalised, and its demography is volatile enough,  the restoration would be most fitting for the ruling party. Hamraz Ahmad is an Assistant Editor at the Centre for Strategic & Contemporary Research (CSCR) in. He has a postgraduate degree in International Relations from Quaid-i-Azam University, Islamabad. 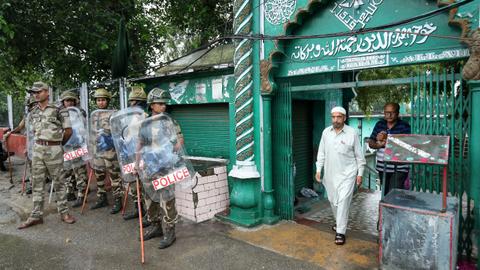