Mustafa Yildiz: A Turkish wrestling champion from the African diaspora

Yildiz’s contributions to Turkey’s oldest sport, as well as struggles to navigate society as an Afro-Turk, are one of many that come to form a larger history of the Afro-Turkish and African diaspora in twentieth century Turkey.

As the late Mustafa Olpak opened his memoir, Kenya-Girit-Istanbul: Kole Kiyisindan Insan Biyografileri ('Kenya-Crete-Istanbul: Human Biographies from the Slave Coast'), the first generation lives, the second generation rejects, the third generation researches. Over the course of my doctoral research, which explores the history of the African diaspora in the Ottoman Empire across the 19th and 20th centuries, I encountered figures that embody his refrain, such as Esmeray Diriker, Frederick Bruce Thomas and Dursune Sirin.

The poet and novelist Dionne Brand pens, "Writing is an act of desire, as is reading", and similarly, much of my work is borne of the desire to place Black figures more squarely in Turkey's cultural history.

Of the several people that I highlighted, Mustafa Yildiz deserves a special highlight for leaving a lasting mark on one of Turkey’s oldest sports - traditional oil wrestling. As my series aims to demonstrate, there are local Afro-diasporic histories that illuminate transnational stories that have yet to be fully explored.

The relationship between Africa and the Ottoman Empire extends well into the early 16th century, geographically extending beyond Egypt and into the Lake Chad region. Over centuries, parts of the continent were incorporated into the empire. Coupled with the preexistence of slave trade in the region, Islam’s convention against enslaving those of the faith, and proximity to the empire, Africa quickly became a casualty of geography and source for labour. As the empire expanded, so too did its slave acquisition through warfare and other means, often from the North African region, the Red Sea, the Gulf and Circassian and Georgian areas.

According to historian Ehud Toledano, some 16,000 to 18,000 enslaved persons were trafficked from Africa into the empire each year over the course of the 19th century. Enslaved Africans in the Ottoman Empire, primarily African women and girls, often laboured as domestic servants. Between 1848 and 1880, the Ottoman Empire would make several attempts at instituting a prohibition against the trafficking of enslaved Africans, and later, attempt to resettle Izmir’s hinterlands with Africans. This, in part, explains how Turkey’s African diaspora came to form a community in the Aegean region.

Perhaps Mustafa Yildiz’s family also experienced such a resettlement process, or they also arrived in Turkey through the Population Exchange of 1923 like Mustafa Olpak’s family. Born in 1943 in Akhisar’s village of Sazoba, he took an early interest in wrestling and entered the Kirkpinar Meydani at 19 years old.

Kirkpinar, a wrestling festival held near Edirne, is the most important yagli gures (oil wrestling) competition that has taken place annually since 1346 and has a rich origin narrative. He proved to be a young success and won first place in the “Deste Orta Boy” category. Perhaps, about this time he also began to be called “Arap Mustafa”, a “nickname" that also silently underscores the racial and linguistic tensions in identifying Black people in Turkey.

A few years later in 1967, Yildiz aimed for the famed title, Baspehlivan (chief wrestler or simply, champion) and in his first year, was selected as the Most Gentleman Wrestler. Yildiz, however, found himself at odds with his title and the referees as they called his defeat against Nazmi Uzun in their 1970 match. Yildiz marched towards the referee box in protest, forcefully complained, and his “ungentlemanly” actions earned him a lifetime ban from Kirkpinar.

His ban was lifted in 1972 and he returned to the competition, this time stronger than before, tossing his opponents one after another, startling many who predicted otherwise. His opponent, Turgut Kilic, was expected to be tough - an underdog from the previous year’s competition. Yet, the fight lasted only 34 minutes, with Yildiz flipping Kilic by the belt, thus winning the title of Baspehlivan and becoming the first black wrestling champion in Turkey.

Not soon after in 1975, he would receive another ban which would last for three years. After a near fatal incident, Yildiz slowly made his triumphant return to Kirkpinar in 1981 to face down Aydin Demir, a four-time champion with three consecutive wins. The match was spread across two days, on account of worsening weather conditions, ending with Yildiz’s second crowning as champion. Sometime after his last match in 1985, Yildiz announced his retirement from the sport, looking to work as a referee instead.

Unfortunately, Yildiz passed away in 2001 but he left us with a few words: “Life is full of surprises. It cannot be known what a person will become. In the third year of my escape from death, I became the Baspehlivan at Kirkpinar.”

In many ways, Yildiz’s legacy is cemented in the world of Turkish oil wrestling and quite literally by Akhisar’s municipality in the form of a statue. His talents also extended to the silver screen, playing roles in Sezgin Burak’s 1969 film Tarkan, and Vural Pakel’s 1971 film 'Korkusuz Kaptan Swing'.

Yildiz’s contributions to Turkey’s oldest sport, as well as struggles to navigate society as an Afro-Turk, are one of many that come to form a larger history of the Afro-Turkish and African diaspora in 20th-century Turkey. When taken together, these histories encourage us to reconsider how a history of the African diaspora in the Ottoman Empire and Turkey might complement - or complicate - received narratives of empire and nation, citizenship and belonging.

Lastly, what these histories suggest, is that there is a rich social and cultural history of Turkey to be explored. As Olpak and Yildiz remind us, it’s imperative that we continue this research because, after all, life is full of surprises. Zavier Wingham is a PhD candidate in the joint program for History and Middle East and Islamic Studies at NYU. His research explores how changing Ottoman elite conceptions of race, slavery and blackness in the empire contributed to new forms of racialization of enslaved and manumitted Africans, as well as how Africans in the Ottoman empire experienced these processes of racialization and sought to create new kinds of community and ways of living. He is currently a PhD fellow at Koc University. 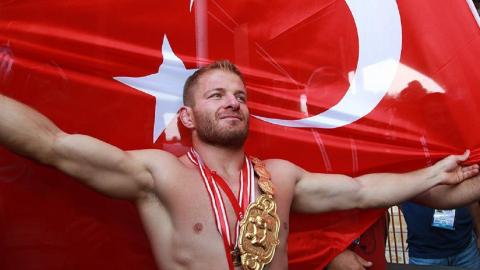