Trump's bullish internationalism is being confused with isolationism

Intensified US and Chinese competition on trade could reshape the international trading environment. More importantly it could be a precursor to a new form of US internationalism.

The simmering economic tensions between the US and China has brought both countries to the brink of a “trade war”.

The latest development that has exacerbated the trade spat between the world’s two largest economies came as President Trump signed a proclamation that imposes a 25 percent tariff on steel and a 10 percent tariff on aluminium imports. Several countries have been exempted from the duties.

But China has not.

In response on April 2, Beijing levied tariffs on more than 100 US products including pork, wine and fruits.

President Trump also approved tariffs on imported solar panels and washing machines as an attempt to protect domestic manufacturing and announced that he will take further action against Chinese trade policies that he thinks are benefiting from unfair competition.

Under President Trump’s ‘America First’ policy, the US is undertaking many measures that are essentially protectionist and nationalist.

The ongoing trade spat reveals a remarkable aspect of the US grand strategy, which under President Trump, is shifting away from handling international affairs through multilateral institutions to bilateral agreements based on the principle of reciprocity.

President Trump objected to the terms of the North American Free Trade Agreement (NAFTA) by defining it as “the worst trade deal ever”; withdrew the US from the Trans-Pacific Partnership (TPP) describing it as a “job killer” and a “rape” of US interests; and stalled the Transatlantic Trade and Investment Partnership (TTIP) talks since his inauguration.

Trump also showed his discontent with the trade deficit the US has with Germany and criticised EU countries for imposing high tariffs on US products.

These moves constitute a conspicuous divergence from what the US has traditionally pursued under the American strategy of leading and maintaining the global trade regime since the end of World War II.

The current liberal world order emerged in the aftermath of WWII. A “rules-based” system grounded on multilateral agreements and institutions made in the image of US interests.

The US acted as a "guardian" for the system viewing its success as crucial to the maintenance of its economic and political hegemony.

Many analysts defined the role of the US in this system as “benign” and “benevolent hegemony” that shouldered the costs and burdens at the expense of short-term potential disadvantages. To perform this task, the US was heavily involved in multilateral agreements and institutions. The Trump era makes a sharp divergence from that position.

Current policies show that the US is unwilling to continue to play this role. In this regard, some analysts have used the term “withdrawal doctrine” in order to describe Trump’s grand strategy by highlighting the extent of the change in the global outlook of the US.

Emergence of a new order

Yet, Trump’s 'America First' policies do not necessarily mean a complete US retreat. Rather, the US is in the process of forming a new way of conducting international affairs, which is to commit to agreements and institutions as long as they serve its own interests; otherwise, the US will reject them.

The latest National Security Strategy (NSS) document by the Trump administration clearly states that Washington will end its support towards international institutions unless they serve US security and economic interests. This means that the US will abandon its self-assumed responsibilities of providing public goods to others since they do not want to bear the costs of sustaining the international order at the expense of gaining little to no benefit from it.

This was also conveyed by President Trump’s inaugural speech, “We’ve made other countries rich while the wealth, strength, and confidence of our country has disappeared over the horizon.”

This statement reflects a zero-sum mentality that views the world as being made up of winners and losers. This sort of reasoning requires the US to prioritise relative gains acquired from its interactions with others and regards this as the only way to improve its interests. Any economic and security agreements or institutions that do not enhance the relative gains of the US are considered as unworthy, unnecessary and harmful to the short and long-term interests of the US.

As an indication of this understanding, the NSS document appeals to the concept of “cooperation with reciprocity” meaning that the US will no longer make economic, political and diplomatic commitments without returns.

Moreover, Trump’s call for European countries to shoulder the burden of defending themselves in his first NATO summit was another instance of this new thinking. In the NSS document, it is also stated that they expect their “European allies to increase defence spending to 2 percent of their gross domestic product by 2024”.

The Trump administration’s new interpretation of international relations has paved the way for the latest trade dispute between China and the US.

By viewing the current trade regime more favourable to China’s interests than that of the US, Trump has attempted to readjust the global economic order in a way that would allow the US to continue to reap more benefits in comparison to other nations.

Contrary to the assumptions that depict the US as an isolationist state, this strategy still carries an internationalist agenda; yet, this time, the main aim is to solely advance US interests.

Additionally, due to the nature of zero-sum reasoning, it offers more conflicts and confrontations in comparison to following a cooperation strategy in international affairs.

In this current climate it's highly probable that the US will act offensively to optimise its poorly defined and erratic national interests by inviting arbitrary assertiveness. ​Hakan Sirin is an Associate Researcher at TRT World Research Centre. He holds a Bachelor of Arts in Political Science and International Relations from Istanbul University. 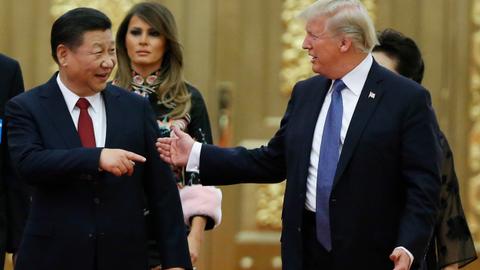