US silence on Yemen could be ending, but not for humanitarian reasons

Roman politician Marcus Tullius Cicero said: “Laws are silent in time of war.” Almost 2,000 years later, it is a phrase that serves to describe the behaviour of Saudi Arabia and its role in a civil war that has killed tens of thousands of people.

According to a CNN investigation released on Monday, sophisticated weapons and vehicles sold by the United States arms manufacturers to Saudi Arabia and the United Arab Emirates have made their way into the hands of militias on both sides of Yemen’s war.

US Defense Department officials confirmed to CNN that they are investigating how the weapons wound up in the hands of violent groups, including Al Qaeda and Houthi rebels, affiliated with Iran. That the weapons are in militia hands is a violation of a US law which prohibits countries that receive US-made weapons from providing them to third parties.

American weapons are available for sale on the Yemeni black market, where they fetch high prices. There has been evidence of American-made weapons ending up in militia hands, either through capture in battle or other means. The CNN report quotes an anonymous source in Yemen saying that Iran has studied the mine-resistant, ambush-protected personnel carriers, also called MRAPS, potentially exposing vulnerabilities that could help Iran target Americans or their allies in the future. Al Qaeda forces in Yemen, nominally allied with the Yemeni government that the Saudi/Emirates coalition supports, have also received the weapons.

An Emirati official told CNN that the Gulf country rejects “in no uncertain terms that we are in violation of end-user agreements in any manner”. It is a remarkable thing to hear deadly weapons referred to with the term “end-user agreement”, something usually used to describe a proprietary piece of software or a smartphone.

The CNN report comes amid growing frustration in the US Congress with the Saudi/Emirates coalition in Yemen, where a massive humanitarian disaster has already killed as many as 85,000 children through famine alone. The killing of Saudi journalist Jamal Khashoggi at the Istanbul consulate last October drew attention to Crown Prince Mohammed bin Salman’s Saudi kingdom, where gruesome public executions and brutal torture are commonplace. Some in the United States are questioning whether Saudi Arabia, under the leadership of a 33-year-old prince accountable to no one, is any ally at all.

How did we get here? Saudi Arabia asserting itself as a regional military power is a bargain President Barack Obama was willing to make in 2015, outsourcing to a longstanding US ally the confrontation of Iran’s regional ambitions. The last two years have made that bargain seem extremely short-sighted. But the process that leads the world to this point began almost two decades ago, in the panicked chaos that followed the September 11, 2001, attacks on New York and Washington.

It began with the “ticking time bomb” scenario that US President George W Bush and Vice President Dick Cheney used to justify to themselves the rightness and goodness of torture.

Torture was justified if using it could extract information from a human being that would save innocent lives. The ends justified the horrific means. Waterboarding, indefinite detention without trial, designing of ways to psychologically torment imprisoned people (threatening to rape their family members, for instance) were all now justified in the War on Terror. Even torturing people to death.

And, of course, America’s allies in the War on Terror, including Saudi Arabia, were tacitly permitted to do even worse. Obama promised to bring an end to these practices, but his administration turned a blind eye to how US allies used torture to “stop” terrorism, sometimes handing over suspects for torture in other countries.

Whether or not the Emirates violated its “end-user agreement” on US weapons seems like a traffic ticket when compared to the scale of crimes the US encouraged its allies to commit. If you can justify denying the humanity of one person, why not millions? Why not starve 85,000 children to death?

These heinous, illegal deeds did not reduce the number of deaths due to terrorist attacks. The past two decades have seen a dramatic rise in attacks around the world, in Iraq, Afghanistan and then in Syria, where Daesh and the Syrian regime tortured thousands to death, despite each group being on opposite sides of the conflict.

But it was the United States that first opened this door by setting an example showing Washington didn’t care how a country went after terrorists. “Just get ‘er done”. Laws, after all, became silent the second the first plane hit the World Trade Center that sunny Tuesday morning.

Trump was the inheritor of a global regime of immense cruelty that began years ago, while he was still a game show host. As a fervent supporter of his Saudi friends, his creditors and customers at his hotels, Trump has done nothing to rein in the kingdom’s abuses. The difference between Trump and Obama or Bush is that he sees torturing people as something to boast about, not hide in shame or explain in euphemisms like “enhanced interrogation”.

Although it’s unknown if Trump has brought back a torture programme for terror suspects, a plan opposed by his top military brass, Trump’s notion that he can stop migration by torturing asylum-seeking children stands as a variation on a Bush-era theme, this time with a nativist remix.

What does all that have to do with Yemen? Well, if torturing one person is OK, why not torture entire countries full of people (Yemen, Syria, Palestine) if it’s in pursuit of stopping terrorism? The dangerous delusion of the Bush administration was that there was some sort of ethical backstop to the use of torture, and that it wasn’t bound to spiral out of control as soon as it began. Saudi Arabia, in particular, has used its experience in torture not just for those affiliated with terrorist groups, but also human rights activists who criticise Riyadh. Saudi torturers can operate without fear of legal consequence, just as Cheney still remains a free man.

Americans sometimes refer to their unending conflicts abroad as “forever wars”. If a war lasts forever, can laws stay silent forever, too?

Wilson Dizard is a freelance journalist based in Washington, DC. 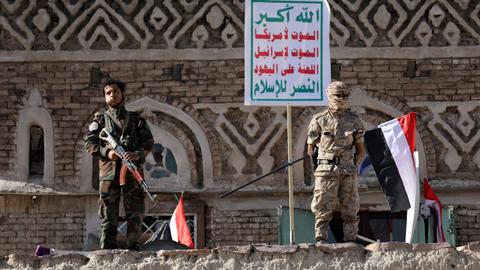