Selling the football club or transferring players are not included on the list of permitted activities under a special licence that has scuppered Roman Abramovich’s plans to offload the London club.

Chelsea owner Roman Abramovich, accused of having close links to Russian President Vladimir Putin, has been hit with an assets freeze and travel ban by the UK.

The British government called Abramovich a “pro-Kremlin oligarch” on Thursday. He is worth more than $12 billion and was also linked with “destabilising,” undermining and threatening Ukraine.

The ripples are being felt at Chelsea, the club Abramovich has pumped more than $2 billion into over 19 years, transforming the team into a powerhouse in European football.

A ban on transfers and selling new tickets were among unprecedented restrictions the government placed on the west London club, throwing Abramovich's plans to sell it into disarray.

The reigning European and world champions will have to operate under a special government “Russia Regulations” license. However, Chelsea are allowed to keep playing.

Anyone with tickets until the end of the season in May can keep on going to matches but no new tickets can be purchased, which impacts the ability of any away fans to go to Stamford Bridge.

Staff, including players, can continue to be paid. The club's wage bill was almost $37 million a month in the most recent accounts. The club also has to stop selling merchandise at its shop.

In addition, the club has been effectively placed under a transfer ban since it cannot spend on registering new players, while there are doubts over the ability to offer new contracts.

Abramovich was one of seven Russian oligarchs slapped with restrictions, including his former business partner Oleg Deripaska.

Others sanctioned were Rosneft chief executive Igor Sechin, whom the British government described as Putin's "right-hand man", and the head of Gazprom Alexei Miller.

London said the seven have a collective net worth of about $19.7 billion and described them all as part of Putin's inner circle.

Prime Minister Boris Johnson called the sanctions "the latest step in the UK's unwavering support for the Ukrainian people".

A spokesperson for his office said the government is open to the sale of Chelsea, but it would require another licence for that to go ahead. 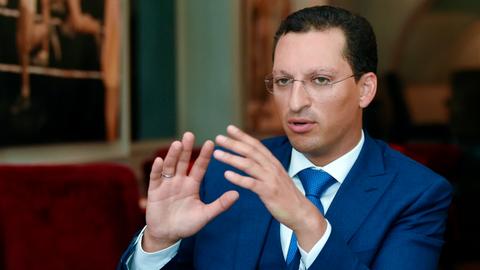 US takes aim at Putin's allies in Russia with new sanctions