India batted first and were restricted to 177 runs. Akbar Ali’s unbeaten 43 from 77 balls helped Bangladesh easily chase of a rain-revised target of 170 under the Duckworth-Lewis method.

Skipper Akbar Ali produced a rearguard innings to guide Bangladesh to its first global cricket trophy with an upset three-wicket victory over India in the Under-19 ICC World Cup final.

India batted first and were restricted to 177 runs on Sunday. Yashasvi Jaiswal led the scoring with 88 before his dismissal in the 40th over triggered a collapse, with India losing seven wickets for 21 in eight overs.

Bangladesh raced to 50 before losing its first wicket, and then collapsed to lose six for 52 as legspinner Ravi Boshnoi (4-30) ripped through the top order.

Akbar Ali’s unbeaten 43 from 77 balls steadied the innings in pursuit of a rain-revised target of 170 under the Duckworth-Lewis method.

Opener Parvez Emon contributed 47 on either side of an injury retirement and Rakbul Hasan hit the winnings runs as Bangladesh reached 170-7 for a three-wicket victory with 30 balls to spare.

"This is the stepping stone for our future cricket," Akbar said. “And this is just the beginning. We need to keep the momentum and the hungriness when we go to the senior side.” 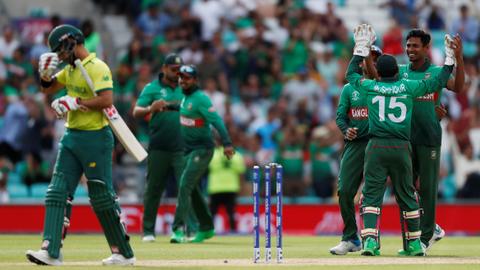