England and Denmark set up semi-final clash at Euro 2020

A buoyant England are looking forward to a Euro 2020 semi-final before 60,000 of their own fans at Wembley, and Denmark beat the Czech Republic 2-1 to reserve their place in next week's semifinals.

England crushed Ukraine 4-0 in Rome to set up a Euro 2020 semi-final against Denmark who continued their remarkable run by beating the Czech Republic in the last eight earlier.

Harry Kane on Saturday scored twice for England at the Stadio Olimpico while Harry Maguire and Jordan Henderson also found the net as Gareth Southgate's side reached the semi-finals of a second consecutive major tournament.

Now they are a step closer to claiming a first major international title since the 1966 World Cup and, with the remaining games in the tournament being played at Wembley, they are favourites to claim the trophy.

READ MORE: Euro 2020: Why the ‘group of death’ vanished before quarter-finals

It's time for the #ThreeLions to head back to base – but first, a quick word with @JHenderson (and @Sanchooo10) 😅 pic.twitter.com/IIi6o7H1oX

Kane put England ahead inside four minutes and although Ukraine finished the first half strongly, Maguire headed in the second goal from a Luke Shaw free-kick within a minute of the second half starting.

Kane scored again with another header, his third goal in two games coming from a Shaw cross, and Henderson came off the bench to head in his first England goal on his 62nd cap.

"We didn't want to take a backwards step. We really wanted to grasp an opportunity. I thought the players were decisive and ruthless all night," said Southgate as England followed their 2-0 last-16 win over Germany with their biggest victory in a major tournament knockout game.

To those in Rome and those at home: thank you for your incredible support! 👏 pic.twitter.com/2Yme87SUK3

They have still not conceded a goal after five games at this European Championship and were certainly not affected by leaving Wembley, where they had played all their matches so far at the tournament, to come to Rome.

An obligatory five-day quarantine for arrivals into Italy from the United Kingdom made it harder for England fans to attend the game, but many of the crowd of close to 12,000 were still supporting them.

"It was actually really great for us to come away from Wembley because it would have been really hard to replicate the atmosphere from the Germany game, so to come here, prepare differently, play in a historic stadium on a night that was beautiful for football, I think inspired the players," said Southgate.

Now England will go back to Wembley for the semi-final on Wednesday against Denmark, with a crowd of around 60,000 set to attend as British authorities further relax restrictions despite a recent surge in coronavirus cases.

"To be able to lead out a team at any game at Wembley is special, to have a semi-final is extra special," said Southgate.

The Danes continued their remarkable run since the trauma of Christian Eriksen's cardiac arrest in their opening defeat by Finland as they beat the Czech Republic 2-1.

They are into the last four of a major tournament for the first time since winning the European Championship in 1992 after first-half goals from Thomas Delaney and Kasper Dolberg in Baku.

A defeat by Belgium followed the Finland game, but they have now scored 10 goals in three straight wins since then.

Who are you backing to lift the 🏆❓#EURO2020 pic.twitter.com/SjjvZ6PSAb

Schick goal not enough for Czechs

Denmark made a dream start in Azerbaijan as Delaney headed home Jens Stryger Larsen's corner in the fifth minute.

They doubled their advantage three minutes before half-time as Dolberg volleyed in Joakim Maehle's magnificent cross.

The Czechs pulled one back in the 49th minute when Patrik Schick tucked Vladimir Coufal's cross into the bottom corner to grab his fifth goal of the tournament and move alongside Cristiano Ronaldo at the top of the scoring charts.

But Schick was substituted after suffering a muscle strain with 11 minutes remaining and Denmark held on.

"We won some games comfortably, 4-1 and 4-0, but this is also a way of winning a football game," said their coach Kasper Hjulmand. "I'm very proud to be in the semi-finals with this team."

Italy and Spain will face off in Tuesday's first semi-final at Wembley.

Italy beat Belgium 2-1 in their quarter-final on Friday to extend their national-record unbeaten run to 32 matches.

However, Italian left-back Leonardo Spinazzola was stretchered off in Munich with an Achilles tendon injury that will keep him out for several months.

Spain advanced by beating Switzerland 3-1 in a penalty shootout after a 1-1 draw in Saint Petersburg. 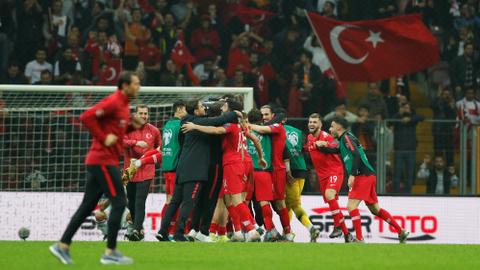