Russia's decision to pull its forces back from the southern Ukrainian region of Kherson was "positive and important," Turkish President Recep Tayyip Erdogan has said.

"Russia's decision regarding Kherson is positive, an important decision," told reporters in the capital Ankara on Thursday before leaving for a summit of Turkic countries in Uzbekistan.

Vowing to maintain dialogue with his Russian counterpart Vladimir Putin, Erdogan's comments came after Moscow ordered its troops on Wednesday to withdraw from Kherson to the east bank of the Dnieper River.

"I don't know whether there will be Russian participation in the G20 or not. We'll have the opportunity to meet face-to-face there (with Putin). Otherwise, we'll continue to maintain telephone diplomacy with Russia," Erdogan said.

On efforts to normalise Ankara's ties with Yerevan, Erdogan said the Armenian diasporas in France and the US were hindering the process.

"The diasporas are constantly working against it, both in France and in the US," he said, suggesting that Armenia could turn "the negative efforts of these diasporas into a positive direction."

"If they can achieve this, our perspective will change in a positive direction," added the Turkish leader. "We strive to make friends, not enemies."

Erdogan said he believes the Organization of Turkic States summit to begin in Samarkand on Friday would carry cooperation between member nations to a new level.

Bilateral relations and global matters will be on the agenda in his contacts with heads of states and governments at the Turkic Council Summit, he added.

READ MORE: Karabakh's destruction should be brought to ICJ for compensation: Erdogan 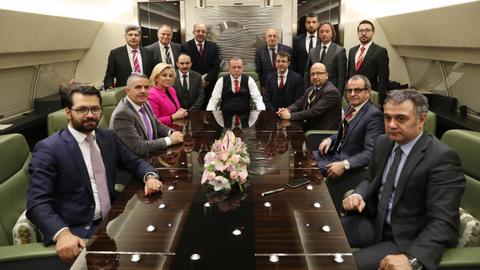