Sudan anti-coup protests back on streets against deal with military

Thousands of Sudanese people demonstrated in the capital Khartoum for a third week in a row against a recent political deal between the prime minister and the military, demanding civilian rule.

Tear gas was used to disperse people marching in a street near the presidential palace in Khartoum on Monday, activist Nazim Sirag said.

Protesters were seen in online videos throwing tear gas canisters back at forces. There were no immediate reports of casualties.

Monday’s protests were called by the Sudanese Professionals Association and the so-called Resistance Committees, which spearheaded the uprising against Omar al Bashir and then the military coup.

The protests came a few days ahead of the third anniversary of the start of the uprising against al Bashir.

Thousands of people have took to the streets in Khartoum and other Sudanese cities as part of relentless demonstrations that have engulfed the country since the military seized power on October 25.

The coup upended a fragile planned transition to democratic rule more than two years after a popular uprising forced the removal of longtime ruler Omar al Bashir and his government in April 2019.

Hamdok was reinstated last month amid international pressure in a deal that calls for an independent technocratic Cabinet under military oversight led by him, as well as the release of government officials and politicians detained since the coup.

The November 21 deal, however, was rejected by the pro-democracy movement, which insists power be handed over to a civilian government to lead the transition.

Their protests follow the slogan: “No negotiations, no compromise, no power-sharing” with the military.

In past rounds of demonstrations security forces used violence, including firing live ammunition at protesters, according to activists.

At least 44 people were killed and hundreds wounded in protests triggered by the coup.

The protests have increased pressure on the military and Hamdok, who has yet to announce his Cabinet.

The prime minister on Sunday appointed new acting governors of the country’s provinces to replace those named by coup leader General Abdel Fattah al Burhan, head of the ruling Sovereign Council, after the coup.

READ MORE: Sudanese women are back on the frontlines of resistance 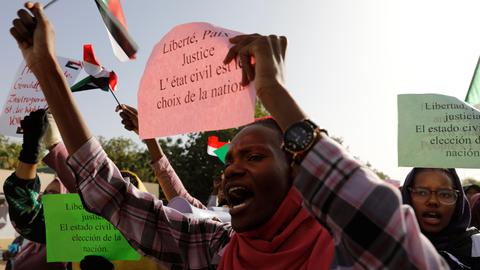