More than 80 people have been killed in two days of ongoing clashes in Sudan's restive Darfur just over two weeks since a long-running peacekeeping mission ended operations.

"The death toll from the bloody events that occurred in El Genena, the capital of West Darfur State, has risen since Saturday morning... to 83 dead, and 160 wounded including from the armed forces," the Central Committee of Sudan Doctors said on Sunday.

The deadly clashes grew out of a fistfight between two people in a camp for displaced people in Genena, the provincial capital.

An Arab man was stabbed to death and his family, from the Arab Rizeigat tribe, attacked the people in the Krinding camp and other areas on Saturday.

The violence is the most significant fighting reported since the signing of a peace agreement in October, which observers hoped would end years of war that has left the vast western region awash with weapons.

The United Nations – a long-running presence in the nation – also expressed deep concerns on Sunday over the violence.

Salah Saleh, a physician and former medical director at the main hospital in Genena, said clashes renewed on Sunday morning at the Abu Zar camp for internally displaced people, south of the provincial capital.

He said most of the victims were shot dead or suffered gunshot wounds.

Adam Regal, a spokesman for a local organisation that helps run refugee camps in Darfur, said there were overnight attacks on Krinding.

He shared footage showing properties burned to the ground and wounded people on stretchers and in hospital beds.

Sudanese authorities have imposed a state-wide curfew in West Darfur, while the Khartoum government dispatched a "high-profile" delegation to help contain the situation.

The union's local branch also said health facilities must be secured and transport made available.

They decided to send reinforcements to the region to secure civilians and key infrastructure, the cabinet announced on Twitter.

"These events showed that the spread of weapons across Sudan, and especially in Darfur, are the main reasons for the deteriorating situation," it said in a statement.

READ MORE: How the UAE is coercing young Sudanese into becoming mercenaries

On December 31, the hybrid United Nations African Union Mission in Darfur (UNAMID) formally ended its 13 years of operations in the region.

It plans a phased withdrawal of its approximately 8,000 armed and civilian personnel within six months.

The Sudanese government "will take over responsibility for the protection of civilians" in Darfur, UNAMID said as its mandate ended.

Also in late December, clashes in South Darfur state left at least 15 people dead and dozens wounded, prompting the government to send troops to the area.

On Sunday, the UN secretary-general's spokesman Stephane Dujarric called on Sudanese authorities to "bring an end to the fighting".

"Escalating inter-communal violence has resulted in scores of deaths and injuries, the displacement of nearly 50,000 people and the destruction of property," he said in a statement.

Darfur endured a bitter conflict that erupted in 2003, leaving roughly 300,000 people dead and 2.5 million displaced, according to the UN.

The fighting erupted when ethnic minority rebels rose up against the Arab-dominated government in Khartoum, which responded by recruiting and arming a notorious Arab-dominated militia known as the Janjaweed.

The violence often centres on land ownership and access to water.

READ MORE: Why does Sudan need the UN forces when it has its own military?

Bashir, who is currently in custody in Khartoum, is wanted by the International Criminal Court for alleged genocide and war crimes in Darfur perpetrated more than a decade ago.

But two groups refused to join the recent peace deal, including the Sudan Liberation Movement (SLM) faction led by Abdelwahid Nour, which is believed to maintain considerable support in Darfur.

The Sudanese Professionals Association said the violence in West Darfur shows the "deficiencies" of the peace agreement, which they said did not address the roots of the crisis in the region. 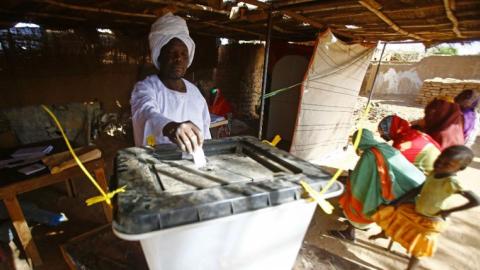 Darfur votes for its future despite boycott by rebel groups