Oregon is the hardest-hit state in the western US, where nearly 100 extreme wildfires are burning, even as forecasters say some weather relief is in sight.

Wildfires have raged unchecked across parts of the western US amid gusty and dry conditions, but forecasters have said some weather relief was in sight that could help firefighters overwhelmed by the blazes.

Hundreds of homes have been lost to massive and unprecedented Oregon wildfires with a potentially historic number of fatalities feared in the northwestern US state, governor Kate Brown said on Wednesday.

In Washington, more acres burned in a single day than firefighters usually see all year. Fires also forced people to flee in Oregon and Idaho.

A temperature plunge of as much as 15 Degree Celsius, caused by a dramatic intrusion of polar air, helped slow wildfires in Colorado and Montana.

Diminishing winds were possible by Thursday, "bringing some relief to the ongoing fires and fire weather threat," forecasters said. 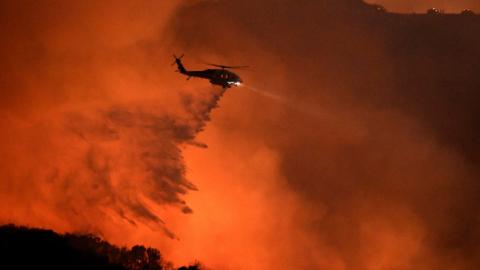