Former Colombian president Juan Manuel Santos, who won the 2016 Nobel Peace Prize for his efforts  to end the longest-running conflict in the Americas, has harshly criticised the country’s current president Ivan Duque for threatening measures that could scuttle the deal with the Revolutionary Armed Forces of Colombia, also known as the FARC.

Santos said that Duque's position on overhauling the pact is being fueled by misinformation.

“Many of the things that they said about the peace agreement were simply false news. Today we’re having a lot of false news around the world, and here in Colombia it’s not an exception, and they invented all kinds of stories about what we were negotiating,” Santos said in an exclusive interview with TRT World.

You can watch TRT World’s full interview with Santos here.

Duque, a 42-year-old centre-right politician, has long criticised the deal with FARC as being too lenient especially when it comes to allowing former guerillas accused of atrocities to run for elections and avoid jail terms.

In his inaugural address, Duque said though he would continue the peace process, he would also take steps to fix structural “flaws” in the deal, without giving details.

"We will deploy corrective measures to ensure that the victims get the truth, proportional justice, reparations - and no repetitions of the past,” he said.

Duque’s election victory was seen as a result of his connection with popular former president Alvaro Uribe, who headed the country from 2002 to 2010.

Uribe’s tenure was marked by his steadfast opposition of negotiating peace with the FARC, which was behind the killing of his father in 1983. Since then, Uribe has called for tougher action  against the guerillas.

Uribe invested heavily in the security forces and stepped up military operations against the FARC and other rebels during his tenure.

Juan Manuel Santos, his former defense minister, pledged to continue his policies. However, after Santos’ success in 2010, he distanced himself from his predecessor, straining the relationship between the two.

Santos started negotiations with the FARC in September 2012 that mostly took place in Cuba.

Nearly two months before the Colombian Congress confirmed the peace deal, Bogota held a referendum in 2016 to get approval from the nation.

However, it turned out to be a fiasco with 50.2 percent of Colombians voting against it. Despite the nation’s veto, Santos went against the popular feeling and sent a revised version of the agreement to the congress. It was ratified.

Following the highly controversial peace deal, FARC transformed itself into a political party last year and some of its members were elected to parliament in June elections.

“They’re changing their position. Now, the president has said 'I would respect the agreements, the agreements I support. I want some small changes',” Santos said.

“That is very different from what he used to say when he was a candidate.”

Duque has repeatedly told supporters during his presidential campaign that he didn’t want to “shatter the agreement.”

“We want to make it clear that a Colombia of peace is a Colombia where peace meets justice,” he said in May 27 as supporters waved balloons and chanted his name in Bogota.

Carlos Antonio Lozada, a former FARC guerrilla once wanted by Washington and now a senator in the congress, has shared the same ideas with Santos about misinformation by the media.

“What we have here really is a phenomenon of manipulation by the media and not the rejection of the peace agreement by the majority of society,” Lozada told TRT World.

The 50 years of conflict has left 260,000 people dead and displaced more than seven million.

The violence hurt the economy and made it difficult to attract foreign investment for decades.

Colombia now has the highest foreign investment rate in Latin America, but the unemployment rate has risen to 9.7 according to a recent forecast. It was around 8 percent in 2016.

Also, various armed groups continue to threaten the security and deny giving up their arms.

“In the case of Colombia it’s a smaller percentage than normal average. We have to go after them. That is a law and order problem now,” said former president Santos.

At the same time, these new armed groups have filled the vacuum and taken control of drug trafficking routes that were once controlled by the powerful FARC.

A White House report said that coca cultivation rose 11 percent to 209,000 hectares (516,450 acres) in 2017, a level unseen in more than two decades of record keeping and $10 billion in US counter-narcotics work. Estimated cocaine production increased 19 percent to 921 metric tons.

The roots of the main problems remain unresolved, and the peace deal is facing fresh scrutiny that some fear could spell a return to violence.

“The peace isn’t simply giving food to guerrillas; peace is the state being present with social investment for the communities,” Manuel Alonso, one of the ex-FARC guerrillas, told TRT World.

“War is for crazy people. I hope we won’t have to return to war.”

Despite the hardships the process faces, Santos hopes the Duque government will continue the peace process, saying it’s very hard to bring back “the revolution”.

“This is a long process. One thing is to silence the guns. Another very different and more difficult is to construct peace, because peace really has to be constructed in your own hearts, in the way you perceive the opposition, your enemies, and that takes time,” Santos said. 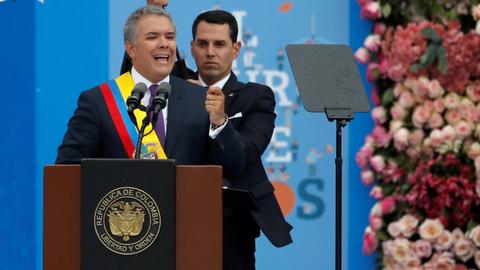