The quake hit the west-central province late on Monday at a depth of 10 km, GFZ said.

The US Tsunami Warning System said no tsunami warning has been issued for the earthquake. The quake was also felt in the provin ces of Mendoza, Cordoba, Santa Fe, La Rioja and Buenos Aires.

There were no immediate reports of serious damages or victims.

The US Geological Survey said the quake had a preliminary magnitude of 6.4 and its epicentre was 27.6 km southwest of the town of Porcito.

The quake was followed by a magnitude 5.0 aftershock about a quarter hour later, the USGS said.

"Many neighbours came down from the buildings and houses, went out into the street. The water in the pool moved like the sea," Ricardo, a resident of Mendoza city, told local newspaper Clarin.

Posts on social media showed many homes and buildings shaking, with the seismic activity leaving cracks in roads, while glass bottles fell off the shelves in shops.
San Juan Governor Sergio Uñac urged people to remain calm following the earthquake and called on them to reach out in case they need any assistance.

Strong movement was felt in Chile's capital, Santiago, which is about 300 kilometres from the area hit by the quake.

Chilean officials said there was no damage reported in that nation.

Media in Argentina said electricity failed in the region around Porcito and some goods were shaken from supermarket shelves. 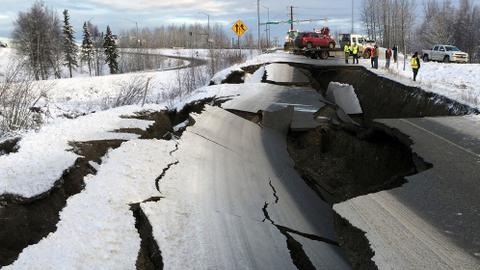