Every president from Bill Clinton onward had pledged to recognise Jerusalem as Israel's capital but reneged on that promise in office.

President Donald Trump will announce on Wednesday that the United States recognises Jerusalem as the capital of Israel and will move its embassy there, breaking with longtime US policy and likely stirring unrest.

Despite warnings from Western and Arab allies, Trump in a 1800 GMT (1:00pm) White House speech will direct the State Department to begin looking for a site for an embassy in Jerusalem as part of what is expected to be a years-long process of relocating diplomatic operations from Tel Aviv.

Trump is to sign a national security waiver delaying a move of the embassy, since the United States does not have an embassy structure in Jerusalem to move into. A senior administration official said it could take three to four years to build an embassy.

Trump's decision, a core promise of his campaign last year, will upend decades of American policy that has seen the status of Jerusalem as part of a two-state solution for Israelis and Palestinians, who want East Jerusalem as their capital.

Washington's Middle East allies all warned against the likely repercussions of his decision when Trump spoke to them on Tuesday.

“The president believes this is a recognition of reality,” said one official, who briefed reporters on Tuesday about the announcement. "We’re going forward on the basis of a truth that is undeniable. It’s just a fact."

Senior Trump administration officials said Trump's decision was not intended to tip the scale in Israel's favour and that agreeing on the final status of Jerusalem would remain a central part of any peace deal between Israel and the Palestinians.

In defending the decision, the officials said Trump was basically reflecting what the current White House sees as a fundamental truth: that Jerusalem is the seat of the Israeli government and should be recognised as such.

The Palestinians have said the move would mean the "kiss of death" to the two-state solution.

TRT World's Editor-at-Large Ahmed al Burai explains some of the implications of the move.

The political benefits for Trump are unclear, although the decision will thrill Republican conservatives and evangelical Christians who make up a large share of his core political base.

The move is at odds with Trump's stated desire for a more stable Middle East and Israel-Palestinian peace and arouse tensions. Past presidents have put off such a move.

The mere hint of his decision to move the embassy in the future set off alarm bells around the Middle East, raising the prospect of violence.

"Our Palestinian people everywhere will not allow this conspiracy to pass, and their options are open in defending their land and their sacred places," said Hamas chief Ismail Haniyeh.

Jordan and the Palestinians on Wednesday requested an emergency Arab foreign ministers' meeting to discuss US President Donald Trump's plan to recognise Jerusalem as the capital of Israel, the Arab League said.

The meeting is likely to be convened on Saturday, a diplomatic source said.

Before the plan's announcement late on Tuesday, Arab League member state delegates issued a joint statement saying it would constitute a "clear assault on the Arab nation and the rights of Palestinians and all Muslims and Christians."

Meanwhile, Turkey’s presidential spokesman said on Wednesday that President Recep Tayyip Erdogan is calling for a summit of the main pan-Islamic body in Istanbul on December 13 to coordinate a response to Trump’s decision on Jerusalem.

"In the face of developments that arouse sensitivity over the status of Jerusalem, Mr President is calling a leaders' summit of the Organisation of Islamic Cooperation (OIC) in order to display joint action among Islamic countries," Kalin said.

Turkey currently holds the chairmanshi p of the OIC.

The decision comes as Trump's senior adviser and son-in-law, Jared Kushner, leads a relatively quiet effort to restart long-stalled peace efforts in the region, with little in the way of tangible progress thus far.

"The president will reiterate how committed he is to peace. While we understand how some parties might react, we are still working on our plan which is not yet ready. We have time to get it right and see how people feel after this news is processed over the next period of time," one senior official said.

The Jordanian king "affirmed that the decision will have serious implications that will undermine efforts to resume the peace process and will provoke Muslims and Christians alike," said a statement from his office.

Israel captured Arab East Jerusalem in the 1967 Middle East war and later annexed it. The international community does not recognise Israeli sovereignty over the entire city, home to sites holy to the Muslim, Jewish and Christian religions.

Turkey's President Recep Tayyip Erdogan has warned that recognition of Jerusalem as Israel's capital is a "red line" for Muslims.

UN spokesman Stephane Dujarric said, "We have always regarded Jerusalem as a final-status issue that must be resolved through direct negotiations between the two parties based on relevant Security Council resolutions."

No other country has its embassy in Jerusalem.

Both France and Germany issued travels warnings ahead of Trump's planned announcement.

France's Foreign Ministry also warned on its website that demonstrations were expected and that its nationals should avoid them and any large crowds in East Jerusalem, the West Bank and Gaza.

In an update of its travel advice for Israel and the Palestinian territories, the German ministry in Berlin said: "From December 6, 2017, there may be demonstrations in Jerusalem, the West Bank and the Gaza Strip. Violent clashes can not be ruled out." 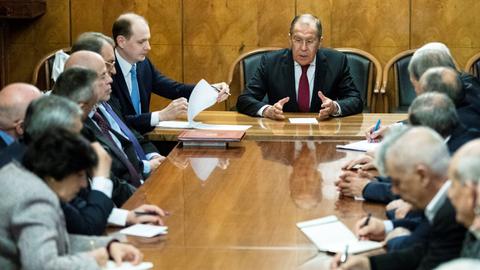