The House vote is set for Thursday evening to vote on the Justice in Policing Act, perhaps the most ambitious proposed changes to police procedures and accountability in decades.

The US House of Representatives will vote on Thursday on sweeping Democratic police reform legislation that is opposed by President Donald Trump and Republicans, in the latest sign that congressional efforts to rein in police misconduct have hit an impasse.

The Democratic-controlled House is due to consider the legislation a month to the day after George Floyd's May 25 death in police custody set off worldwide protests against police brutality.

The bill, which mandates concrete changes in laws and policy to rein in police misconduct, is widely expected to pass the House. But the Republican-led Senate is unlikely to agree to the measure as written, after Senate Democrats blocked a Republican reform bill on Wednesday.

After the collapse of a policing overhaul in the Senate, House Democrats returned to Washington on Thursday for a day heavy with emotion, symbolism and voting on their sweeping proposal to address the global outcry over the death of Floyd and other Black Americans.

House Speaker Nancy Pelosi gathered with members of the Congressional Black Caucus on the Capitol steps challenging Congress not to allow the deaths and the outpouring of public support for law enforcement changes go in vain.

“Exactly one month ago, George Floyd spoke his final words — ‘ I cant breathe’ — and changed the course of history,” Pelosi said.

She said the Senate faces a choice "to honour George Floyd's life or to do nothing."

The House vote is set for Thursday evening on the Justice in Policing Act, perhaps the most ambitious proposed changes to police procedures and accountability in decades. Backed by the nation's leading civil rights groups, it seeks to match the moment of massive street-filled demonstrations. It has almost zero chance of becoming law.

On the eve of the vote, Trump's administration signalled he would veto the bill.

Democrats and Republicans are deadlocked over how to address racial inequities in American policing despite strong public sentiment for effective reform after Floyd died in Minneapolis after a white policeman knelt on his neck for nearly nine minutes.

Senator Tim Scott, the Senate's only Black Republican and author of the chamber's failed police reform bill, accused Democrats of rejecting Republican input on the House bill to deny Trump and his Republican allies a victory on an issue vital to black America ahead of the November election.

"This is pure race politics at its worst," Scott said on Fox News, warning that congressional inaction will leave black Americans vulnerable to further police violence. "There will be blood on the Democrats' hands," he said.

The Democratic and Republican bills address similar issues: chokeholds, no-knock warrants, police body cameras, use of deadly force, and training to de-escalate confrontations with suspects and to encourage officer intervention against illegal conduct as it occurs.

Republicans oppose the Democratic bill because of mandates they say could undermine law enforcement. Democrats opposed the Republican measure for seeking reform through incentives and data collection rather than imposing changes outright.

But some lawmakers hold out hope that negotiations will ultimately produce bipartisan reforms that can be approved by both chambers of Congress and be signed into law by Trump. 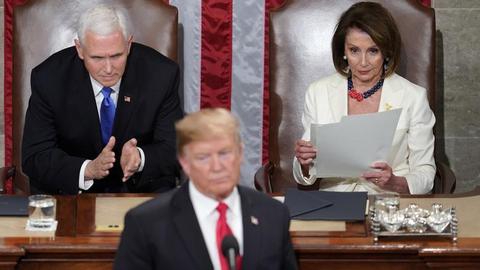 US House to vote Thursday on Trump impeachment procedures