Black Muslim Festival, an online event to celebrate the contributions and achievements of Muslims of African descent, has kicked off.

Award-winning author, entrepreneur, and motivational speaker Naima B Robert launched the first-ever such festival on Friday and it runs till October 25.

"The Black Muslim community has been long forgotten in conversations around representation and diversity from within the Muslim and the non-Muslim community," she told TRT World.

The festival comes off the heels of the Black Lives Matter movement protests that took place globally during the summer, after the deaths of unarmed Black men and women in the US including Ahmaud Arberry, Breonna Taylor, and George Floyd.

Speakers will include a host of different Black Muslim personalities from across all over the African diaspora and across different sectors including academics, authors, creatives, business owners, social media influencers, and journalists.

Topics of discussion include identity and mental health to relationships and parenting, from wealth creation and business to community activism.

READ MORE: Muslims in the UK aim to make a mark in the British general election

Programme for 1st day of Black Muslim Festival - an online event to celebrate the contributions and achievements of Muslims of African descent. #BlackMuslimFestival founded by @NaimaBRobert #BlackHistoryMonth
Link below to get your ticket:https://t.co/DdbrvBvbCJ pic.twitter.com/TGMbd88xgm

The festival is an opportunity to tackle the issue of racism within the wider global Black community, they said.

Organisers highlighted that in the United States alone, African-American Muslims make up 25 percent of the American Muslim community.

Africa is home to some of the largest Muslim majority countries including Guinea, Senegal, Sierra Leone, and Nigeria.

In a blog shared by the festival founder Robert on her Instagram account, poet Tumkeen wrote, "Amid the pandemic chaos, lockdowns, and quarantines, there was an awakening that was birthed from the horrific loss of Ahmaud Arbery, George Floyd, Breonna Taylor (unfortunately the list continues), etc."

"An awakening for non-Blacks to the unjust, systemic cruelty and injustice that has plagued the Black people for a very long time."

The poet added, "But it also awakened something else. It awakened non-Blacks to the realisation of the Black presence in our lives that we didn't know existed or we needed. Black lives are not just left on the ground to die under the knee of a white man." 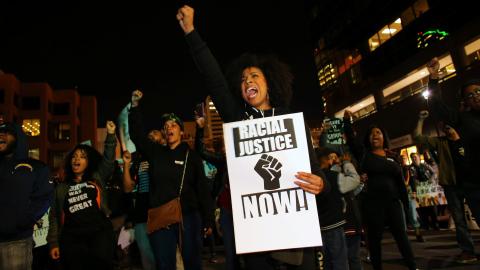 This is not about Hamza Yusuf