Focusing on lives and philosophies of ordinary people, Kiarostami's work proved Iranian cinema was one of the most original and emotionally engaging in the world.

Tributes poured in on Tuesday for Iranian filmmaker Abbas Kiarostami, acclaimed as a "towering figure" in world cinema, following his death in France at the age of 76.

As a writer-director, Kiarostami showed that Iranian cinema was one of the most original and emotionally engaging in the world. He died on Monday from complications related to cancer.

Kiarostami won the coveted Palme d'Or at the Cannes Film Festival in 1997 for Taste of Cherry. It was a film about a middle-aged Iranian man who planned to commit suicide and was looking for someone to bury him when he was dead.

Emerging from a new wave of Iranian cinema that started in the 1960s, he became one of the world's most revered directors.

"He was a true gentleman, and, truly, one of our great artists," Scorsese told entertainment magazine The Hollywood Reporter.

News of his death broke late on Monday, with Iranian media reporting that he died from a blood clot in the brain following months of treatment for intestinal problems.

The ISNA news agency said he had returned to Iran from his home in Paris to undergo several operations between February and April, before travelling back to France last week for further treatment.

"Kiarostami's different and deep outlook on life, and his invitation to peace and friendship, will be an everlasting achievement," tweeted Iranian President Hassan Rouhani.

Just last week, Kiarostami had been invited to join the Academy in Hollywood as part of its efforts to increase the diversity of its Oscar judges.

"He wasn't just a filmmaker. He was a modern mystic, both in his cinema and his private life," Asghar Farhadi, a renowned Iranian film director, told The Guardian.

Iranian cinemas were due to pause showings on Tuesday evening for a prayer in Kiarostami's memory, ISNA reported.

In a statement on Tuesday, French President Francois Hollande praised the director for forging "close artistic ties and deep friendships" with France.

Kiarostami was one of the few filmmakers to stay and prosper in Iran after the 1979 Islamic revolution.

His films, which often centred around children or poorer Iranians living in rural areas, were never seen as overtly political. He preferred to tell philosophical tales about the lives of ordinary people.

Although some of his films were banned in Iran, he became an ambassador for the country's cultural riches.

"On the one hand, there is the state cinema, financed by the authorities... then there is an independent sector that is flourishing," he told reporters at Cannes in May.

Born in the Iranian capital on June 22, 1940, Kiarostami studied painting at the University of Tehran before finding work as a graphic designer and director of commercials.

He joined the Centre for the Intellectual Development of Children and Young Adults in 1969 as head of the film department.

Two years later, he released his first work, a short film called Bread and Alley, followed by the feature-length The Traveller in 1973.

Kiarostami was launched on to the international stage by his Koker trilogy, named after the town in which they were set, which starting with 1987's "Where is the Friend's Home?"

His films were known for their modest style, dark realism and sly humour. They were almost always shot in real locations, often featuring non-actors.

"Some refer to his pictures as 'minimal' or 'minimalist', but it's actually the opposite," Scorsese told The Hollywood Reporter.

"Every scene in Taste of Cherry or Where Is the Friend's House? is overflowing with beauty and surprise, patiently and exquisitely captured."

Kiarostami's Palme d'Or victory in 1997 led to some difficulties in his home country after French actress Catherine Deneuve gave him a kiss while presenting the award -- enough to garner the fury of conservatives in Iran.

He went on to win the Special Jury Prize at the Venice film festival two years later for The Wind Will Carry Us.

He travelled the world in his later years, making films such as Certified Copy in Italy and Like Someone in Love in Japan.

Although this afforded him greater freedom from Iran's censors, the globe-trotting was also an attempt, he said, to tell stories about "universal characters, that can be accessible to everyone." 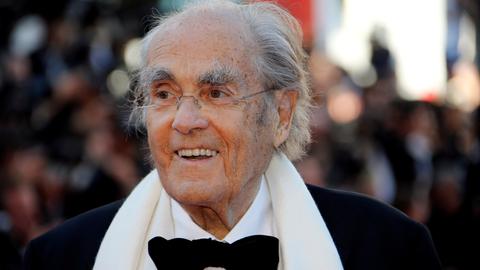