Tehreek-e-Labiak Pakistan party leader Saad Hussain Rizvi was detained after threatening the government with protests if it did not expel France's ambassador over depictions of Islam's Prophet Muhammad.

Clashes have erupted in several Pakistan cities including Lahore after police arrested the leader of Tehreek-e-Labiak Pakistan party (TLP).

The party's leadership and a senior police official confirmed Saad Hussain Rizvi was detained on Monday.

Following the unrest, one TLP employee was shot dead during a protest in Karachi city where protesters blocked roads.

Police use tear gas and water cannon to disperse thousands of protesters who blocked streets and intersections in Lahore. Protests were also reported in other cities including Hyderabad, Rawalpindi, Multan and Islamabad.

Pakistan police arrested the party leader a day after he threatened the government with protests if it did not expel France's ambassador over depictions of Islam's Prophet Muhammad.

I strongly condemned the arrest of Saad hussain Rizvi sb without any crime https://t.co/40nFpaAwbT

Rizvi called on the government to honour what he said was a commitment it made in February to his party to expel the French envoy before April 20 over the publication in France of depictions of Islam’s Prophet.

The government has said that it only committed to discuss the matter in Parliament.

Rizvi emerged as the leader of the Tehreek-e-Labiak Pakistan party in November after the sudden death of his father, Khadim Hussein Rizvi. 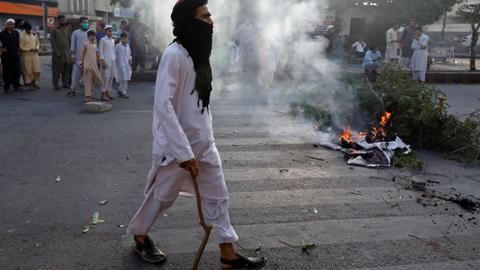 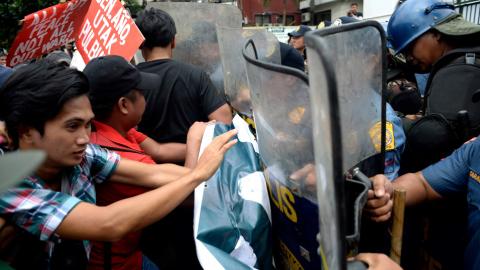 Protesters clash with police in Philippines