Sources close to President Macron say one aim of his visit was to buy time and freeze the situation for several months, at least until a "Super April" of elections in Europe –– in Hungary, Slovenia and, crucially for Macron, in France.

French President Emmanuel Macron will be flying to Russian capital Moscow in a risky diplomatic move, seeking commitments from President Vladimir Putin to dial down tensions with Ukraine, where Western leaders fear the Kremlin plans an invasion.

Macron who is flying to Moscow on Monday has made a frenetic series of phone calls with Western allies, Putin and the Ukrainian leader over the past week.

He will follow up on Tuesday with a visit to Kiev, staking a lot of political capital on a mission that could prove embarrassing if he returns empty-handed.

"We're heading to Putin's lair, in many ways it's a throw of the dice," one source close to Macron told Reuters news agency.

Two sources close to Macron said one aim of his visit was to buy time and freeze the situation for several months, at least until a "Super April" of elections in Europe –– in Hungary, Slovenia and, crucially for Macron, in France.

Russia has massed some 100,000 troops near Ukraine and demanded NATO and US security guarantees, including that NATO never admit Ukraine as a member. It denies allegations that it plans to invade Ukraine.

The French leader, who has earned a reputation for highly publicised diplomatic forays since he took power in 2017, has both tried to cajole and confront Putin over the past five years.

His efforts have brought close dialogue with the Russian leader as well as painful setbacks.

Soon after his election, Macron rolled out the red carpet for Putin at the Palace of Versailles, but also used the visit to publicly decry Russian meddling during the election.

But Macron's many overtures did not prevent Russian encroachment into traditional French spheres of influence in Africa, culminating late last year with the arrival of Russian mercenaries in Mali.

French officials think they are supported by the Kremlin.

To counter critics ahead of the trip and take on the mantle of European leadership in this crisis, Macron has been at pains to consult with other Western leaders this time, including Britain's Boris Johnson and US President Joe Biden.

The French president's visit to Moscow and Ukraine comes less than three months before a presidential election at home.

His political advisers see a potential electoral dividend, although Macron has yet to announce whether he will run.

"For the president, it's an opportunity to show his leadership in Europe. That he is above the fray," one French government source said. 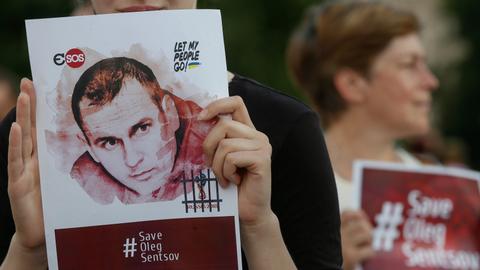