France's lower house of parliament is opening debate on a security bill that would permit the imprisonment of people who publish images of police officers with "the intent to cause them harm."

Those who would publish such images would face up to one year in prison and a $53,000 fine under the proposed law championed by lawmakers of President Emmanuel Macron's party, which has a majority at the National Assembly.

The bill came in a time that France has been criticised for its crackdown on Islamic centres in the country and anti-Islam statements made by President Macron and his party.

The bill's most controversial measure would make it a new criminal offence "to disseminate, by whatever means and on whatever media, with the intent of causing physical or psychological harm, an image of the face or any other element that could identify a police officer."

Speaking last week, he said it is needed because officers "are constantly threatened in their personal life" after being identified and because there are "calls for female officers to be raped."

He downplayed any impact for journalists, saying they'll "obviously still be able to film any police intervention."

"The publication of images relating to police interventions are legitimate and necessary for democratic functioning," she said.

Journalists' unions and rights campaigners called for protests on Tuesday in front of the National Assembly.

Critics are warning that the bill will result in "massive" self-censorship and argue that images posted online help expose police blunders and brutality.

They say the measure would endanger journalists and citizen-journalists, especially during violent demonstrations.

They also worry about how courts will determine whether images were posted with intent to harm.

The National Assembly is scheduled to vote next week on the bill, which will then go to the Senate. 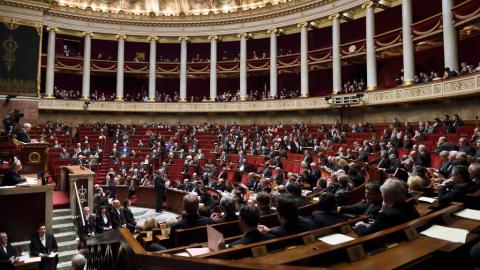