A government press release says that as of Tuesday, Macedonia is officially called the Republic of North Macedonia.

Macedonia on Tuesday officially renamed itself North Macedonia, honouring an agreement to end a decades-old dispute with neighbouring Greece and secure its entry into NATO.

A government press release said that as of Tuesday, the country is officially called the Republic of North Macedonia.

"May today be the beginning of a long friendship between Greece and North Macedonia," he said in a tweet. "We can't change our past, but we can and we will shape our future of friendship, partnership and cooperation."

We have just exchanged the final note verbale: Prespa Agreement enters into force! May today be the beginning of a long friendship between Greece and North Macedonia. We can’t change our past, but we can and we will shape our future of friendship, partnership and cooperation.

The name change finally resolves a dispute with Greece dating back to Macedonia's declaration of independence from the former Yugoslavia in 1991.

Athens had long argued that its small, landlocked neighbour's name implied claims on the northern Greek province of Macedonia, and on ancient Greek cultural heritage.

The breakthrough in the dispute came last summer, when the prime ministers of Macedonia and Greece, Zoran Zaev and Alexis Tsipras, agreed to a compromise under which Greece also lifted its objections to Macedonia joining NATO and the European Union.

Macedonia's deputy foreign minister, Andrej Zernovski, told the local TV Telma that authorities will change, within three days, road signs at border crossings, airports and customs to conform with the country's new name. Within four months, he said, the Interior Ministry will start issuing new car license plates with the abbreviation NMK, while new passports will be issued at the end of this year.

Earlier Tuesday, Macedonia raised a NATO flag at its main government building, as members of the alliance continued to ratify the country's accession agreement.

Speaking at a ceremony in the capital of Skopje, Zaev said Macedonia had achieved a "historic goal" in being accepted into NATO.

All of NATO's 29 current members must ratify the accession. Slovenia on Tuesday became the second country to do so after Greece, which lifted its objections to Macedonia's NATO membership last week. 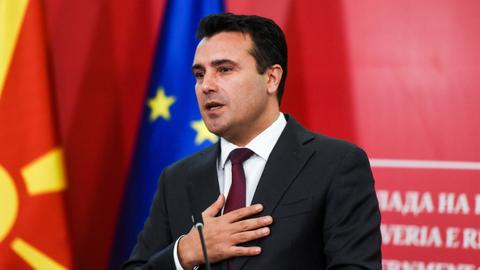