Two men targeted a 19-year-old woman, inflicting injuries upon her with a sharp object and calling her a “filthy Arab.”

A Muslim woman, whose name has not been made public, was brutally assaulted in what appears to be a hate crime carried out by two racist men in Anderlues town near Brussels on Monday, Belgian media reported.

The 19-year-old woman was walking alone in an alley around 2100 GMT (11 pm local) when two unnamed assailants stood in her way, according to Belgium’s official news agency Belga.

The men took off her headscarf and tore apart her shirt, exposing her upper body.

As she tried to escape, the two men hurled racial slurs at the victim, calling her a “filthy Arab” before knocking her to the ground.

Then, the attackers used a sharp object to cut her body, including her torso, stomach and legs, in the shape of a cross, the Belga said.

The men fled after the incident.

The police is yet to reveal details about the health condition of the woman.

The local police have launched an investigation into the attack.

A call for calm

Philippe Tison, the Mayor of Anderlues, condemned the attack on Wednesday, two days after the attack that, according to him, took place in "a municipality that has achieved its model of living together."

“I was shocked to learn that a racist attack against one of our fellow citizens was occurred in Anderlues,” Tison, the mayor, said on his Facebook account.

“It is a despicable act that saddens all of us ... We can not tolerate our fellow citizens are becoming victims of racist aggression,” he said.

Rise on the attacks against Muslims in Europe

With the rise of far-right political parties, European countries have witnessed a sharp increase in racist and Islamophobic attacks due to their anti-Muslim and anti-migrant policies.

According to the European Islamophobia Report 2017, prepared by the Ankara-based Foundation for Political, Economic and Social Research, SETA, a rising wave of Islamophobia has taken hold in Europe.

The report revealed 908 crimes, ranging from verbal and physical attacks to murder attempts, targeting Muslims in Germany, as well as 664 in Poland, 364 in the Netherlands, 256 in Austria, 121 in France, 56 in Denmark and 36 in Belgium.

The mosques across Europe have endured dozens of attacks over the past year as attackers attempted to arson them with Molotov cocktails or spray-painted terror symbols or racist slurs on the walls.

Germany takes the lead in hate crimes against mosques, as over 30 of them, were targeted in such attacks in the first three months of this year - double the figure in the same period last year. 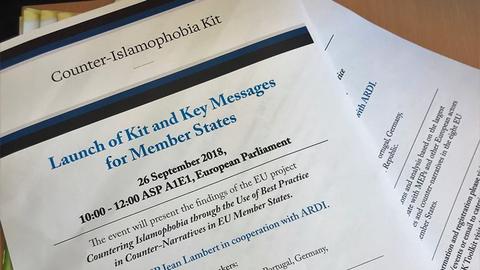