An internal report reveals that three Oxfam employees were also involved in "physically threatening and intimidating" a witness who spoke to investigators.

British aid charity Oxfam on Monday released its internal report into a scandal in Haiti that has shattered its reputation, revealing that a former top official admitted to paying for sex and three staff physically threatened a witness.

The 2011 report into aid workers deployed to Haiti following the devastating earthquake the previous year, revealed that seven staff were accused of using prostitutes at an Oxfam-funded residence.

Country director Roland Van Hauwermeiren admitted paying for sex and was offered a "phased and dignified exit" of resignation if he co-operated with the inquiry.

The report also said three Oxfam employees were involved in "physically threatening and intimidating" a witness who spoke to the investigators.

Four staff were fired for gross misconduct and three others, including Van Hauwermeiren, were allowed to quit.

Details of the Haiti scandal surfaced earlier this month and have engulfed Oxfam, drawing widespread condemnation and putting its funding at risk.

A senior executive has resigned and the British government has warned it must reform before bidding for any new taxpayer funds.

Oxfam has denied trying to cover up the allegations but admitted it could have been more open at the time, saying it was publishing the report "in recognition of the breach of trust that has been caused."

It said it would give a copy to the Haitian government, which has expressed outrage and launched its own inquiry, at a meeting later on Monday.

All names in the report have been redacted apart from that of Van Hauwermeiren, a 68-year-old Belgian who last week released a letter defending himself after the scandal broke.

In it, he claimed he had not visited any brothels, nightclubs or bars in Haiti, despite offers from men and women "who tried to get into my house with all sorts of excuses to demand money, work, or to offer sexual services."

He said he told Oxfam he had "intimate relations" three times at his house with "an honourable, mature woman, who was not an earthquake victim nor a prostitute. And I did not give her any money."

In an interview with The Times, however, a young Haitian mother claimed she had a relationship with Van Hauwermeiren when she was 16 – legally underage in Haiti.

Now 23, Mikelange Gabou said he initially helped her with nappies and other things for her baby, and that they later had a "loving relationship" and he would sometimes give her money.

There were other women he invited to his hilltop house, she said. "So it might be that he had sex with them and promised to find them a job, or sometimes he gave money or didn't give them money."

Oxfam last week unveiled an action plan to tackle sexual harassment and abuse, including creating a new vetting system for staff, and has urged victims to come forward with any new allegations.

Chief executive Mark Goldring on Friday hit out over criticism of the charity, saying it was "out of proportion" to what had happened.

But the entire aid sector is facing renewed scrutiny, including how they communicate with each other.

A woman who worked alongside Van Hauwermeiren in Liberia said she made a complaint about him in 2004 – many years before the Haiti scandal.

One recommendation in the 2011 report was for better mechanisms to share information with other regions and agencies about behavioural issues.

Goldring has been called to explain the scandal to British MPs in London on Tuesday alongside senior managers from fellow charity Save the Children.

Save the Children is facing its own problems after claims this weekend that one staff member drunkenly harassed a female colleague in 2015, holding her by the throat.

Brendan Cox, the widower of murdered British MP Jo Cox, resigned shortly afterwards. In a statement, he admitted making errors while working at the charity, saying: "I made mistakes and behaved in a way that caused some women hurt and offence." 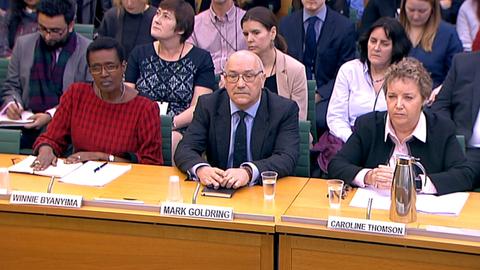 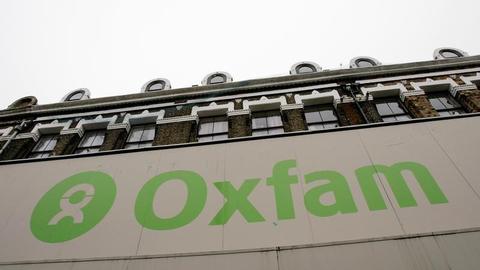