US Army General Mark Milley said any possible Russian attack on Ukraine would result in "a significant amount of casualties" and destruction.

The Pentagon has said that the destruction and human cost of a full-scale incursion by Russian forces into Ukraine would be "horrific," but that there is still time for diplomacy to avoid a war.

"If that was unleashed on Ukraine, it would be significant, very significant, and it would result in a significant amount of casualties," Chairman of the Joint Chiefs of Staff Mark Milley said on Friday.

"And you can imagine what that might look like in dense urban areas, along roads and so on and so forth. It would be horrific, it will be terrible."

"Conflict is not inevitable. There is still time and space for diplomacy," said Austin.

"Mr. Putin can do the right thing as well," he added. "There is no reason that this situation has to devolve into conflict. He can choose to de-escalate. He can order his troops away," he said.

READ MORE: As tensions soar over Ukraine, who is responsible for disinformation?

The remarks of the US military's two top officials, who had been quiet in recent days over the rise in tensions in Eastern Europe, came as there was no sign of a breakthrough in diplomatic efforts to avoid open conflict.

They said Russia continues to add to its forces pointed at Ukraine, with a range of offensive units and capabilities including armor, air power, naval power, missiles, and cyber and political operations.

While the Pentagon officials said they do not believe Putin has made a decision to go to war, they said his options have expanded, from provocations that could lead to an attack in the restive southeast Donbass region, to an attempt to overrun the entire country, attacking urban centers like the capital Kiev.

"If war were to break out on a scale and scope that is possible, the civilian population will suffer immensely," Milley said. Russia itself will suffer, he added.

"If Russia chooses to invade Ukraine it will not be cost-free, in terms of casualties or other significant effects."

Austin and Milley stressed that Washington has no intention of sending US troops to Ukraine to defend it, but will continue to support the Ukraine military with arms and other materials.

However, they stressed, the United States was prepared to send troops to reinforce and protect NATO allies in eastern Europe that faced a potential threat from a Russian attack on Ukraine, which is not part of the Atlantic alliance.

"An attack on one NATO ally is an attack against all," Milley warned. 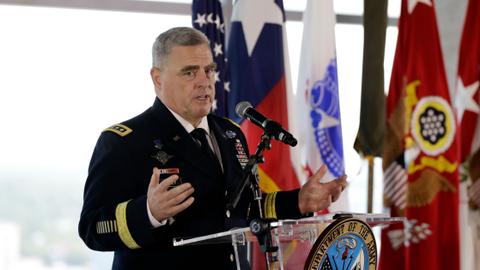