“These are not a short-term stop-gap, but a long-term commitment to bolster military ties and global stability, and fortify Europe’s defences for generations to come,” UK PM Johnson says.

Britain has pledged to defend Sweden if the country came under attack, with Prime Ministers Boris Johnson and Magdalena Andersson signing a security assurance deal outside Stockholm.

The agreement will “fortify northern Europe’s defences, in the face of renewed threats,” Johnson said in a statement on Wednesday, adding it “is a symbol of the everlasting assurance between our nations."

“These are not a short-term stop-gap, but a long-term commitment to bolster military ties and global stability, and fortify Europe’s defences for generations to come,” Johnson said in the statement.

Sweden and Finland are pondering whether to join NATO following Russia's incursion into Ukraine on February 24.

Johnson is later expected to make a similar defence commitment to Finland, where he will meet with President Sauli Niinisto.

“And whether it’s in the event of a disaster or a military attack, what we’re saying today is that upon request from the other party, we would come to the other parties’ assistance,” Johnson told a joint news conference.

He said that the attack against Ukraine is Russian President Vladimir Putin’s "bloodthirsty campaign against a sovereign nation.”

Andersson said: “Putin thought he could cause division, but he has achieved the opposite. We stand here today more united than ever."

READ MORE: A look into Sweden and Finland’s Russia policy

The Kremlin has warned of “military and political repercussions” if Sweden and Finland decide to join NATO.

Andersson said that Russia would increase its “military presence in this region if Sweden and or Finland sends in an application.”

Should they apply, there will be an interim period lasting from when an application has been handed in until all 30 NATO members’ parliaments have ratified it.

The two Nordic countries are expected to announce their positions on NATO membership in the coming days.

In 2017, Sweden and Finland joined the British-led military rapid reaction force, which is designed to be more flexible and respond more quickly than the larger NATO alliance.

It uses NATO standards and doctrine, so it can operate in conjunction with NATO, UN or other multinational coalitions.

Fully operational since 2018, the force has held a number of exercises both independently and in cooperation with NATO.

READ MORE: What are the pros and cons of becoming a NATO member? 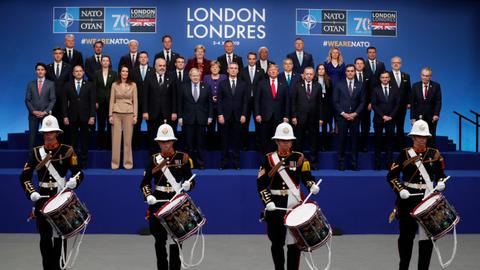