1
Somalia's political wrangling raises the spectre of violence
2
Does China’s policy to end overseas projects signal the end for coal?
3
Hezbollah reportedly threatens Beirut explosion investigator
4
Is Biden's pledge to donate 500m vaccine doses too little, too late?
5
Is Tunisia's Kais Saied turning back the clock on the country's democracy?

Comedian Volodymyr Zelenskiy won the Ukrainian presidency with a landslide 73 percent votes, according to official announcements, making a celebrated TV comedian the head of a country that has been dealing with the war imposed on them by Russia and its regional proxies.

The upcoming Orthodox Easter holidays are likely to delay the final results until April 30 however, according to the country's election commission.

So how did Ukraine come to the point of electing a comic, a political neophyte to the country's top governing post?

It all started with a TV series called Servant of the People, in which a regular teacher, but also a man with high moral standards, does not accept a bribe and, by accident, becomes the president of Ukraine. This righteous man enters the depraved world of politics, in which leaders are highly corrupt and indifferent to the day-to-day problems faced by Ukrainians. The role resonated with the masses, who are fed up of rampant corruption and deep economic instability.

The man who played the remarkable role of teacher-turned-president was 41-year-old Zelenskiy, whose real life political success has a lot to do with what he told people during his campaign. He was spot-on right from naming his political party after the TV series to highlighting the most compelling issues like corruption and the poor economy. He soon became the voice of the unheard, with the vast majority of Ukrainians frustrated by growing inequality that breeds on corrupt practices in government-run institutions. Zelenskiy's character in the celebrated TV show made all the more sense as he displayed similar anger and resentment against the powerful oligarchs while addressing large crowds at real political events.

“The expectation of him is very high. Even more, I think that a lot of people deep-down voted for him thinking they voted for TV Zelenskiy, so now he has to deliver in real life as the real president of Ukraine,” said Machael Bociurkiw, a global affairs analyst and former spokesman for the Organisation for Security and Cooperation in Europe (OSCE).

Zelenskiy has managed to play it well until now, using his blank political portfolio as his political strength. As an efficient speaker with great stage experience, he steered the dissatisfaction and disappointment of Ukrainians and united them against the powerful elite.

Even suspicions about his links to business oligarch Ihor Kolomoyskyi, or the latest about him being financially supported by Russians, did not disturb his momentum.

But what kind of leader he will turn out to be? It's hard to predict as of now. But Bociurkiw said Zelenskiy comes across as a leader who is not only "very personable", but also the one who "cares for the people."

Bociurkiw said Zelenskiy's top advisers told him that they would first focus on empowering people and strengthening public institutions. "Those are positive things. However, that are not really things that will affect the pocket of ordinary Ukrainians so again – they have to move very quickly,” he added.

Zelenskiy will inherit several problems and challenges his predecessor could not fix in his tenure. Here are the most pressing issues he'll have to tackle head on.

The war in eastern Ukraine

War-torn eastern Ukraine, which in the first round of elections largely voted for Yuriy Boiko (the candidate linked to the government of former president Victor Yanukovich, stripped of presidency in the 2014 revolution), in the second round also supported the candidacy of Zelenskiy. Or precisely, voted strongly against current president Petro Poroshenko, who was campaigning for re-election.

In his previous campaign five years ago, the exiting president made a promise to end the war. However, his words remain an unforgotten and unfulfilled promise today. The war continues, bringing the death toll to 13,000 in five years. As a consequence, the majority of inhabitants of the front-line towns have little or no trust in Poroshenko.

It is understandable that what counts above all for the people of eastern Ukraine is security, which is also exactly what Poroshenko failed to provide. Neither silence at night, free from the sounds of missiles, nor roads and fields without land mines. Although an awareness that the war cannot end overnight is quite palpable on the ground, Ukrainians, especially in the volatile eastern front, have a strong urge for peace and stability.

And Zelenskiy magnified this hope for peace. "Our priority number one now is to return all of our prisoners, all of our hostages, prisoners of war," he said on Sunday in his victory speech.

The east faces different problems to other parts of the country like Lviv, one of the pro- Poroshenko bastions, or even Kiev and its elites. And the parallel realities of Ukraine, in the fifth year of the war, seem quite detached from each other.

Even the final debate, which took place on April 19, just before the second round of the elections at the stadium in Kiev, resembled more a war of words, or ‘sparring rappers’, as people pointed it out, than a serious political debate. Instead of discussing their policy interventions for the next five years, both candidates engaged in trading accusations and making exaggerated claims.

In the process, Poroshenko and Zelenskiy stood intellectually naked in front of a highly-charged audience that was waiting to hear about their future plans.

“I hoped to finally hear concrete arguments before making a choice who to vote for. I cannot say I did not enjoy the debate, but it did not bring the information I expected,” Oleksandr Saverchuk, a resident of the Ukrainian city of Bakhmut, told TRT World.

The victory of Zelenskiy however comes with a new breath of novelty, excitement and hope. People largely feel someone is out there to hear them and offer solutions, which has injected a sense of optimism across the country.

“Also there was a very large protest vote. People were not happy with the lack of delivery on broaden issues from Poroshenko so they are going to expect quick kind of solutions to economic problems here," Ukraine expert Bociurkiw said.

"The big problem there, though, is that many measures need to get through the Verhovna Rada, Ukrainian parliament, and that could be very difficult given how fractious it is. It is going to be a lot of work to go through.” Magdalena Chodownik, an award-winning journalist, multimedia journalist and producer. She studied at the Catholic University of Lublin (Poland), University Paris 8 (France), University of Vienna (Austria) and University Ramkhamhaeng (Thailand). She lived and covered political and social issues in the Eastern Europe, South-East Asia, GCC, Balkans and Caucasus. She is currently based in Poland and Ukraine. 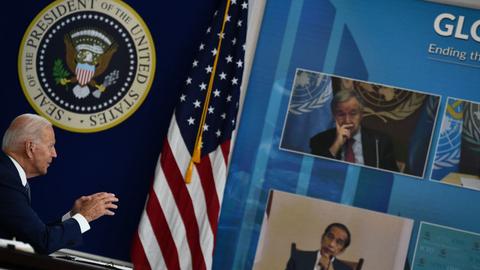 Is Biden's pledge to donate 500m vaccine doses too little, too late?

1
Somalia's political wrangling raises the spectre of violence
2
Does China’s policy to end overseas projects signal the end for coal?
3
Hezbollah reportedly threatens Beirut explosion investigator
4
Is Biden's pledge to donate 500m vaccine doses too little, too late?
5
Is Tunisia's Kais Saied turning back the clock on the country's democracy?