1
UK cabinet reshuffle: Who’s in and who’s out
2
From Yaglidere to the US: A story of chain migration
3
What role will Qatar play in Taliban-ruled Afghanistan?
4
Taliban's arrival busted Kabul's mixed-gender restaurant boom
5
Were Afghan women forced to attend the pro-Taliban rally?

After the British Labour Party was fraught with bitter infighting between the Blairites and Corbyn supporters, the party's newfound energy and unity has paid dividends on the campaign trail. But is this going to be enough to win the election?

LONDON – It was the Saturday before the election, and Londoners were enjoying the warmth of an early summer evening. Many were drinking to try to forget politics, for a little while.

Just before 10:00pm, three men ploughed a white van into busy crowds crossing London Bridge, then drew knives and ran into the crowded streets of nearby Borough Market, a buzzing nightspot of narrow alleys filled with busy bars and restaurants. In some bars, patrons fought the attackers off with bar stools and threw pint glasses at them, according to eyewitnesses.

Seven people were killed, and 48 more injured, before police officers found and shot the attackers. Campaigning was halted for a day in honour of the victims. When Labour leader Jeremy Corbyn resumed his work on Sunday evening, it was with a renewed sense of urgency. Over the past decade the Conservative party had cut 20,000 police officers, Corbyn said; he pledged to put 10,000 back on the streets, and to give the police authority to "use whatever force is necessary."

If his statement seems odd coming from a candidate from the left wing of British politics, rather than from the Conservatives, who traditionally style themselves the party of law and order, it fits in well with everything that's happened in this topsy-turvy campaign.

This election was never supposed to happen. The last one was just two years ago, in May 2015. The intervening 24 months contained the earthquake upset of the Brexit referendum and the chaos that followed it, as both the ruling Conservative Party and the Labour opposition went through bitterly-fought leadership contests.

Theresa May, who succeeded David Cameron as prime minister after his post-referendum resignation, stated categorically on eight separate occasions that there would be no snap election – as recently as March, a spokesperson said: "There isn't going to be one. It isn't going to happen." Just 28 days later, May called the election. A BBC video of a Bristol woman learning of the election went immediately viral, as she seemed to speak for an entire nation sick of politics.

"You're joking," she says in dismay. "Not another one."

When May announced the election, on April 18, the Tories had a commanding lead. In a YouGov voting intentions poll the day before the announcement was made, 44 percent said they would vote Conservative, compared to just 23 percent for Labour. May thought she saw an opportunity to win an easy electoral victory, increase her parliamentary majority, and silence her opponents.

The Labour party was in poor shape. While the Tories got all of their infighting finished within weeks of the referendum, Labour had spent the year since the referendum mired in a very public civil war. Its leader, Jeremy Corbyn, is a maverick figure who won leadership in 2015 after an insurgent grassroots campaign.

An unapologetic socialist, and long-serving back bench MP, everything Corbyn stands for is in stark contrast with the centrist "New Labour" approach of Tony Blair. He has an anti-internationalist bent, too, and despite his position on the Remain campaign, many came to believe that Corbyn supported Leave and may have even acted to sabotage the campaign.

Almost the entire shadow cabinet resigned in the days after the referendum and a vote of no confidence in Corbyn among his MPs triggered a second leadership election. Corbyn easily won, but it was an embarrassing spectacle. The campaign slogan May chose when she called this election, and has been repeating robotically since April – "strong and stable leadership" – was designed as a direct jibe at the Labour party's weakness and instability.

"The whole election was called ostensibly for Brexit," said Dan Roberts, Brexit correspondent for the Guardian newspaper. "May's wanted to bolster her majority so she would be in a strong negotiating position. And so she tried to make it all about Brexit – but it's largely failed."

The campaign was marred by two terror attacks – one in London, and one in Manchester – and May broke the campaign truce just hours after the London Bridge attack, leading to accusations that she was politicising the tragedy. Counter-attacks on May's behalf by Britain's right-leaning tabloid press, especially the rabidly conservative Daily Mail, to paint Corbyn as a terrorist sympathiser have not rung true, and have allowed Corbyn to use a tactic that served Donald Trump well in last year's US election: striking out at the "mainstream media."

He is helped in this by a febrile constellation of left-leaning blogs like Another Angry Voice and The Canary, the latter of whose anti-MSM rhetoric and rabid loyalty to Corbyn are an interesting mirror-image of the role played in the US by outlets like Breitbart. These posts can reach huge audiences; a Buzzfeed News analysis found that articles from sites like The Canary average more than twice the number of shares on Facebook than articles by mainstream outlets like the BBC.

For Labour, the looming general election brought the party's internal sectarian conflicts to an uneasy truce. "I think Jeremy has been relieved of the stress of being leader of the opposition, which is a very difficult job to do," said Matt Zarb-Cousin, a former Corbyn spokesperson. "A general election campaign it's totally different – I think he's really enjoying it."

This newfound energy and unity paid dividends on the campaign trail. "There was a lot of pushback against [Corbyn] to start off with," said Grace Fletcher-Hackwood, a Labour campaigner and councillor in Manchester. "The public perception was such a low bar when this campaign started that the only way it could go was up. The more people have seen of him, and seen he's not the terrible supposed monster that the papers say – that he's more this geography teacher, who seems nice, and wants to help the NHS – he's had a very good campaign, whereas Theresa May has been shockingly bad."

Dr Tim Oliver, who teaches politics at the London School of Economics, said that the tightening of the polls was down to "a mix of May being an awful campaigner and Corbyn being on the campaign trail where he enjoys and performs best."

"May is more of a technocrat," Oliver said. "Corbyn has spent his life campaigning, protesting, agitating."

Squandering their poll lead, the Tories made a series of unforced errors. "May is very much the centrepiece of the Conservative campaign, so damage to her claims of strength and stability are far more costly than the [widely anticipated] weaknesses of Jeremy Corbyn," said Dr Matt Cole, a historian at the University of Birmingham who specialises in British party politics.

Cole pointed to proposed reforms in the Conservative manifesto to benefits for the elderly, which led to outrage over what even conservative newspapers dubbed a "dementia tax", as well as the prime minister's refusal to take part in a televised debate with the other leaders, as particularly costly errors. May's absence from the debate was lambasted as cowardly, and the hashtag #whereisTheresa trended on Twitter.

Meanwhile, the roll-out of Labour's manifesto was a triumph. Stuffed with populist policies like the re-nationalisation of the railways and the post office, it became the most-shared political link on social media the week it was released.

"Strong and stable" was quickly becoming a punchline as polls tightened. But polling companies, reeling from their failure to accurately predict the results of the 2015 election and the Brexit referendum, are presenting an unusually wide spread. All agree that the Conservatives' lead has dropped, but some still put them 11 points ahead of Labour. Others show just a one-point gap between the two main parties, leading some to predict a hung parliament – where no party wins enough of a majority to form a government.

This outcome is unlikely. "Almost all of the pollsters are all showing the same raw result – a small conservative lead – in the unweighted data," said Marcus Roberts, the director of international projects at polling firm YouGov. The issue, he said, comes when the companies try to weight that data using a variety of analytical models. None of them knows exactly whose model will come out right on the night. "This is an experimental election for pollsters," he said. "We're trying to find out what it is we got wrong in the past, and what we can do this time to correct the mistakes."

What has to be taken into account, Roberts said, is that "Labour has a voter coalition that is dependant on low-turnout, low-loyalty voters," like students, young people, and people who have historically voted Green or Liberal Democrat. "In contrast, the Conservative electoral coalition is made up primarily of high-turnout, high-loyalty voters, who have often voted Conservative and often vote in elections – particularly older voters." The question is whether Labour's fragile coalition will show up in meaningful numbers on election day.

Joe Cassidy, a Labour volunteer from London, said that early in the campaign canvassers were given advice on how to talk to voters who dislike Corbyn personally. That stopped, he said, as the campaign went on; people he met on the doorstep were much better-disposed to the Labour leader.

His gut feeling, though: "I think we're going to lose, still. I'm not going to consider the prospect of a Labour victory until we're five points ahead, not one point behind." Nicky Woolf is a journalist based between London and Los Angeles. He covers politics and technology. 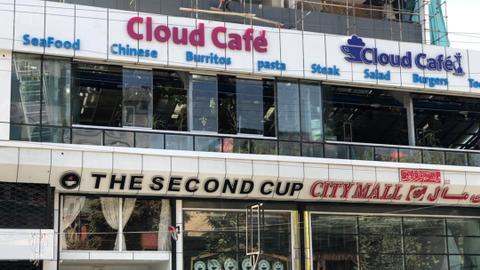 1
UK cabinet reshuffle: Who’s in and who’s out
2
From Yaglidere to the US: A story of chain migration
3
What role will Qatar play in Taliban-ruled Afghanistan?
4
Taliban's arrival busted Kabul's mixed-gender restaurant boom
5
Were Afghan women forced to attend the pro-Taliban rally?